South America’s second-largest country is on the cusp of another devastating default according to analysts. Meanwhile, international investors are closely monitoring the situation, as they would like to know how Argentina’s government would handle these problems.

It is important to mention that Argentina needs to restructure $100 billion in debt. Out of $100 billion, the country should pay $44 billion to the International Monetary fund (IMF).

The IMF sent a team of economists to Buenos Aires to discuss this problem with the newly elected government. This team arrived in the capital city of Argentina several days ago. The purpose of this visit is to avoid the prospect of another default.

As a reminder, in 2001, the country defaulted on around $100 billion of debt. It triggered the worst economic crisis toe ever happen in Argentina. As a result, millions of middle-class citizens became poor. Moreover, many citizens in Argentina blame on the fiscal policies of the IMF.

The situation is quite difficult. According to the head of Latin America at Verisk Maplecroft Jimena Blanco, there is a big chance to register another default. Moreover, the risk consultancy assigned a 77% probability that Argentina would default before the end of 2020.

Unfortunately, if the country would default on its debts, it will be the ninth default in the history of Argentina. Furthermore, the risk also increased in recent weeks due to a lack of policy cohesion within the coalition. Also, the country’s government is running out of time and it will become harder to secure strong political backing. 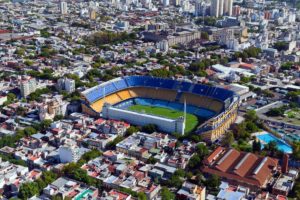 It will be tough to find the ideal solution. The administration made it clear that it won’t agree to the kind of budget cuts the IMF insists on similar circumstances. However, it is desperate to restructure commitments with the IMF. Interestingly, the International Monetary Fund is the single biggest creditor, so Argentina should work harder to reach an agreement with the monetary fund.

Moreover, the IMF underlined its position regarding this issue. The fund is not willing to accept a loss on its biggest-ever bailout package. Also, according to the IMF Managing Director Kristalina Georgieva, the fund is not ready to offer a so-called haircut on its $44 billion loan to Argentina.

The country’s government should work together with the IMF to reach an agreement. Also, current as well as future administrations should pay more attention to the local economy.