Asian shares slumped on Friday after China reported a set of weak data, fuelling fresh worries of a slowdown in the world’s second biggest economy and leaving investors fretting over the wider impact of a yet to be solved US-China trade dispute.

China’s benchmark Shanghai Composite and the blue-chip CSI 300 closed down 1.5 percent and 1.7 percent, respectively, and Hong Kong’s Hang Seng was off 1.5 percent.

Financial spread-better expect London’s FTSE, Franfurt’s DAX, and Paris CAC to fall between 0.7 to 0.8 percent when they open.

China’s November retail sales grew at the weakest pace since 2003 and industrial output gained the least in almost three years as domestic demand softened further, highlighting increasing risks to the economy as Beijing works to defuse trade tensions with the United States.

A Chinese statistics bureau spokesman said the November data showed that the downward pressure on the economy is increasing.

The data “means that the worst is yet to come and policy makers will be worried, particularly with consumption growth falling off a cliff,” said  Sue Trinh, who is head of Asia FX strategy at RBC Capital Markets in Hong Kong.

“So I expect further support measures including rate cuts will come in coming weeks, although these data would indicate measures to date aren’t really working,” Trinh said.

The Chinese yuan softened 0.15 percent to 6.8888 per dollar in offshore trade after the data.

“Although hopes of progress in US-China talks and cheap valuations are supporting the markets for now, we have lots of potential pitfalls,” said Nobuhiko Kuramochi, who is the chief strategist at Mizuho Securities. “If US shares fell below their triple bottoms hit recently, that would be a very weak technical sign.”

US corporate earnings due next month  could throw the attention on the impacts from the US tariffs on imports from China, while there is risk of a government shutdown and further political stalemate in a divided US congress, Kuramochi added. 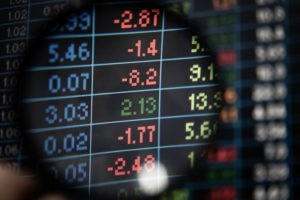 Meanwhile in the forex market, the euro stuck in its well-worn $1.13 to $1.14 range over the past  few days, a  day after the European Central Bank ended its 2.6 trillion euro bond purchase scheme but promised to continue reinvesting maturing bonds, thereby sidestepping the shrinkage of its balance sheet for an extended period of time.

“With Thursday’s decision, the ECB is only taking very lightly the foot off the accelerator of monetary policy, which is by no means a real normalization of monetary policy,” said Oliver Eichmann, who is the co-head of EMEA fixed income at DWS in Frankfurt.

Sterling’s rally fizzled out as signs that the British parliament headed towards a deadlock over Brexit prompted traders to take profits from its gains made after Prime Minister Theresa May had survived a no-confidence vote.