Boeing 737 Max grounding could cost a lot of money

Boeing 737 is one of the most civilian airplanes in the world. Currently, it is the only narrow-body airliner produced by Boeing. This plane remains popular among airlines. However, due to the accidents, the newest version of Boeing 737 remains grounded. Aviation authorities made to suspend the operation of this type of aircraft several months ago.

Southwest Airlines is the largest U.S. operator of 737 Max planes. Currently, it has 34 such aircraft in its fleet. Moreover, it ordered more than 200 max airplanes. However, due to problems connected with Max, the airline is unable to use these planes since March 2019.

Recently, Southwest Airlines reached an agreement with Boeing. As part of the deal, Boeing will compensate the airline for some of the financial damages created by the grounding of the 737 Max.

The low-cost airline stated that the negotiations process is not over yet that it expects Boeing to reduce the costs of current and future planes. The world’s largest low-cost carrier declined to disclose the terms of the agreement. However, it reiterated its position that it would share $125 million its employees.

As mentioned above, 737 Max remains on the ground from March. It means that airlines had to deal with the lack of planes for ten months. Airlines such as Southwest, American, and United lost hundreds of millions of dollars in revenue.

Southwest Airlines had no other option rather than to reducer the routes. Moreover, it had to change plans regarding the expansion to other cities. Airlines decided to take the 737 Max planes out of their schedules until early March. 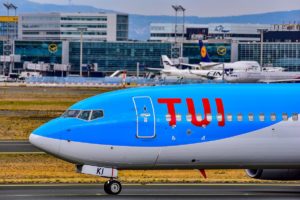 Airlines not in the U.S. but on the other side of the Atlantic Ocean are also struggling due to the lack of planes.

On Wednesday, Anglo-German holiday company TUI group announced that because of the current situation, it would lose up to 400 million euros in its 2020 fiscal year.

TUI Airways, which is the largest charter airline in the world, belongs to TUI Group.

According to the TUI Group, earnings forecast for the 12 months to end-September 2020 may reach 130 million euros. However, CEO Fritz Joussen added that an earnings forecast of at least 6% was based on the 737 Max is back in service in April. The company may lose another 220 million to 270 million euros if the plane remains on the ground.

It is worth mentioning that TUI already lost 293 million euros in the financial year, which ended in September. TUI decided to replace the capacity of the 15 Max planes it operated. Also, it has to solve other problems connected with grounding. Thus, TUI Group was forced to spend millions of euros.

The holiday company expects it will be unable to improve the financials in comparison with last year. This year’s full earnings before interest, tax, and amortization declined by 26% to 893 million euros.

Two days ago, the boss of low-cost carrier Ryanair commented on the situation. He warned that the plane would remain grounded in Europe until April or May. Furthermore, he mentioned that planes might stay out of service for the summer season.