This week Boeing made a decision that will have a severe impact on the American economy. On Tuesday, aircraft manufacturer announced its decision to halt production on its bestselling model which is the Boeing 737. As a result, starting from January Boeing will stop building its bestselling jet.

As a reminder, Boeing 737 Max airplanes are not flying since March after two fatal accidents that claimed hundreds of lives.

Boeing 737 and its versions are one of the most popular commercial airplanes currently in use. It means that Boeing’s move will affect various companies in the U.S. and abroad.

Moreover, it is important to mention that Boeing is one of America’s largest manufacturers. Also, it is the largest exporter in the U.S. This decision would affect not only the aviation industry but the whole economy. There is a risk that the U.S. economy may experience a half-percentage point drop in 2020.

According to the information, Boeing will not produce its bestselling jets in the first quarter of 2020. By temporary shutting down the production of this plane, this could result in a half-percentage point decline of the annualized first-quarter GDP growth rate.

This viewpoint belongs to Michael Pearce, who is a senior US economist at Capital Economics. He is not alone as other economists Joseph Brusuelas from the RMS US shares his opinion.

However, economists from JPMorgan are more skeptical about the U.S. economy. According to Michael Feroli and Daniel Silver, the GDP growth rate could fall by 0.6%.

U.S. economy and its challenges 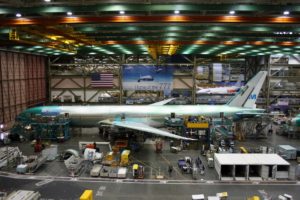 This decision forced the Bank of America to lower America’s GDP forecast for the first quarter of 2020. The bank lowered its baseline forecast from 1.7% to 1.2%.

Unfortunately, the troubles for Boeing, as well as the U.S. economy did not end there, as Moody also downgraded Boeing’s credit ratings. As a result, credit ratings fell from A2 to A3. However, Moody changed its outlook for the company to stable from negative.

Additionally, Boeing’s problems will exacerbate the situation connected with U.S. manufacturing which already experienced problems on its own.

Some people who are not familiar with aviation and particularly Boeing’s situation may find it hard to understand what happened to this company.

Boeing tried to minimize the damage by continuing to produce the 737 Max planes. This was done to help the suppliers. Nevertheless, due to his decision, Boeing has about 400 planes awaiting delivery.

This factor helps to explain why Boeing is losing money. It doesn’t receive the whole amount of money until the client receives the plane from Boeing. As a result, this is bad for GDP growth. On the other, its inventories continue to rise which is helpful for GDP growth.

Boeing stated that it has no intention to reduce the number of employees because of the 737 Max. Employees will switch to other projects. However, companies who are supplying parts to Boeing may have to cut staff. If this is going to happen, consumer spending may also decline; economic growth could fall due to his decision.

Hopefully, when Boeing 737 Max will return to service, Boeing’s activity would benefit the economy.