The Bank of Japan (BOJ) has slashed its inflation forecasts on Wednesday and warned of rising risks to the economy from faltering global demand, further pushing back policymakers’ years-long efforts to foster durable growth.

As widely expected, the BOJ retained its ultra-easy monetary settings at its policy review, leaving Japan some way off from exiting a sweeping stimulus program started in 2013.

The central bank also retained its view that Japan’s economy, which is the world’s third biggest, will continue to expand at a modest pace. Yet the rising pressure on global growth from a trade war between the United States and China, which are Japan’s biggest trading partners, has many analysts wary about the outlook.

“Japan’s economy is likely to continue on an expanding through fiscal 2020,” the central bank said in its report for the quarterly outlook. “Overseas economies are expected to continue growing firmly on the whole, although various developments of late warrant attention such as the trade friction between the United States and China.”

The BOJ warned the domestic economy faces risks on several factors, including protectionism, Brexit, and US economic policy.

“Such downside risks concerning overseas economies are likely to be heightening recently, and it also is necessary to pay close attention to their impact on firms’ and households’ sentiment in Japan,” it said.

A survey of economists showed those external factors have increased the probability of Japan slipping into a recession this coming fiscal year starting in April, making it ever so more difficult for the BOJ to achieve its 2 percent inflation target.

At its policy-setting meeting, the BOJ kept its short term interest rate target at negative 0.1 percent and a pledge to guide 10-year government bond yields around zero percent.

With stubbornly weak inflation compelling it to retain its massive stimulus longer than expected, the BOJ took steps in July to make some changes to its policy framework, such as allowing bond yields to move more flexibly around its target. 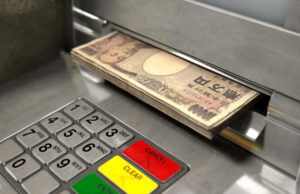 “It will be difficult for the BOJ to discuss policy normalization or an exit strategy for the moments as risks from the global economies are rising,” said Hiroaki Mutou, who is chief economist at Tokai Tokyo Research Institute. “The central bank will likely save easing measures for later and it will examine how the Fed policy movement will be and how it will likely impact the yen.”

The global slowdown has prompted the Federal Reserve to take a more cautious stance on its tightening cycle in recent months, with traders speculating it might press the pause button soon after having increased rates four times last year.

The BOJ slashed its forecast for core consumer inflation to 0.9 percent in the fiscal year starting in April from 1.4 percent, reflecting slumping oil prices and the potential fallout from slowing global growth. It was the fourth downward revision by the central bank to its inflation forecast for fiscal 2019 since it was first estimated in April 2017.