Protests in Hong Kong started in June. Protests began as a response of a law which permitted to extradite prisoners from Hong Kong to China.

The problems connected with the ongoing protest in Hong Kong had a negative impact on the price of Cathay Pacific shares. As shares of the company decreased by 4.85% to HK$ 9.80 on Monday. It means that the price of the company’s shares fell to $1.24, which is the lowest point in 10 years. Moreover, the shares of parent company Swire Pacific also decreased by 6.23% to HK$76.70.

It is worth mentioning that Hong Kong is the Special Administrative Region of the People’s Republic of China. Hong Kong belonged to the United Kingdom until the UK returned this territory to China in 1997. According to this agreement, Hong Kong retained the rights to deal with local issues. It means that Hong Kong is part of China but with special rights and is governed by the principle “one country, two systems.”

Hopefully, Hong Kong’s government decided not to enact the law, which would give authorities the right to send prisoners to mainland China. However, it didn’t stop the protesters to continue protesting against the government. 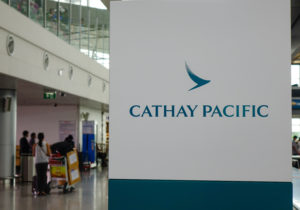 These protests had a negative impact on the aviation industry and the local economy in general. It is essential to mention that Cathay Pacific, which is the flag carrier, suffered financial losses. This is a severe blow to Chinese aviation.

Protests which started in the city center continued in Hong Kong International Airport. This airport is the main base of Cathay Pacific. Moreover, due to ongoing protests, airport authorities canceled dozens of flights from this airport. However, this is not the only problem for the local aviation industry.

In this situation, Cathay Pacific continues to struggle with the problems. The flag carrier is under pressure from both governmental as well as private organizations. Meanwhile, the company has to find a solution which is acceptable for both sides.