Despite the delay, China has restricted the use of single-use plastics. The country’s National Development and Reform Commission issued new regulations banning the use of everything from straws to miniature shampoo bottles.

Greenpeace tweeted that it was the first time Beijing recognized single-use plastics as a significant problem and took measures to reduce them.

In the Last Decade, Plastic Waste Has Boomed in China

Our world in Data, an online publication of Oxford University, announced China produced the most quantity of the material in the world, followed by the United States, Germany, and Brazil.

At present, China is the leading producer of plastic in the world. The last decade has been the period of booming e-commerce and food deliveries. This created a high demand for plastic packaging. The number of parcels delivered in China tripled in the last four years. According to the National Bureau of Statistics, China generated 60.4 million metric tons of synthetic material in 2018. 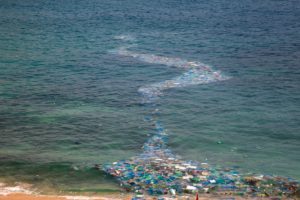 The 2015 study about marine pollution shows that China is responsible for almost 30% of all the plastic products in the world. It is the waste that enters the ocean each year. East Asian countries are significant contributors to plastic waste inputs from land into the ocean. The main reason is their consumers’ uncollected garbage, which ends up in open dumps, notes Ron Bailey noted in Earth Day post.

According to The New York Times, the consumption of plastic products needs stronger comprehensive planning. Additionally, a systematic rollout is necessary to clean up pollution. Well-developed waste management systems that rich countries have managed to recycle, landfill or incinerate almost all their garbage. That’s why the plastic waste of wealthy Japan and South Korea is much less than their neighbors.

China has already taken some measures to address the problem. The country stopped importing plastic waste two years ago, banned the production of super-thin bags and stopped stores from giving out free plastic bags. But the actions the Chinese government is taking is the widest regulation to be implemented since 2008.

Are These Rules Going to be Efficient?

The Chinese government plans to make a shift that won’t be smooth. Thus, the government plans to enforce the restrictions slowly and at different paces. Tang Damin from Greenpeace claims that the new rules are more ambitious than in 2008. But the question lies in how the country can move toward it.