Coca Cola increased its revenue in the third quarter

Home » Coca Cola increased its revenue in the third quarter

The Coca-Cola Company is famous around the world for its nonalcoholic beverages such as Coca-Cola, Fanta, etc. This company dates back to the 19th century and after more than 100 years it still successfully operates in most parts of the world. It is an exciting fact that the company and its beverages became an integral part of American life. People associate Coca-Cola with America, and one of the best known U.S. companies around the globe.

The company, along with several others such as Pepsi Co are earning billions of dollars thanks to these vastly popular beverages. However, due to health reasons more and more people are trying to reduce the consumption of sugary drinks. It means that producers have to come up with another idea to increase the sales of its beverages.

This is a serious challenge not only for Coca-Cola but for the whole industry. At the moment, the situation is quite different from what it was several years ago. People not only became more health-conscious but they also care about the environment. It means that they are willing to spend more time to learn about this or that company. In this situation, it is getting harder to attract customers.

In this situation, the Coca-Cola Company is trying to solve the problems by offering sugar-free drinks. On Friday, Coca-Cola released information about its quarterly revenue. According to this report the quarterly revenue exceeds the expectations. Analysts did not expect that Coca-Cola will be able to achieve such a great result.

However, the strategy to offer more sugar-free beverages, as well as more options such as Coca-Cola plus Coffee, was a smart idea. 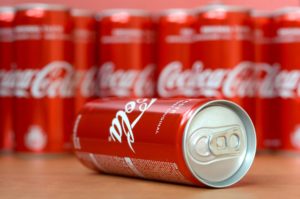 It is important to mention that Coca-Cola is working hard to diversify its portfolio. As a result, the company is offering new products such as the first-ever energy drink in the history of the company. Coca-Cola Energy will help the company to increase its sales.

Another important decision was to acquire the Britain-based Costa Coffee in 2018. This helped the Coca-Cola Company to expand its coffee business.

They are also working on the Coca-Cola Energy Cherry version of its energy drink. According to the company, it only will be available in the United States.

Thanks to the sugar-free drinks, Coca-Cola was able to surpass the expectations for the third quarter. The shares of the company increased by 2.5% in premarket trading.

Another good news is that net sales increased by 8% to 9.5 billion. The expectation was lower as it was expected to increase by 9.4 billion.

The Coca-Cola Company was able to increase its quarterly revenue thanks to its strategy. It turned out that focusing on sugar-free drinks was a good idea.

PrevPreviousJapan Yen Struggles to Hold on to its Gains | Wibest
NextDaily Market Charts and Analysis October 21, 2019Next