CoinePro is a new broker that started off on the wrong foot. The company was founded in 2020, and in less than a year, they’ve had to rebrand in order to avoid their own negative reputation. In our CoinePro review, we’ll present why they’ve earned such an extraordinary amount of negative attention, and check out if anything’s improved. 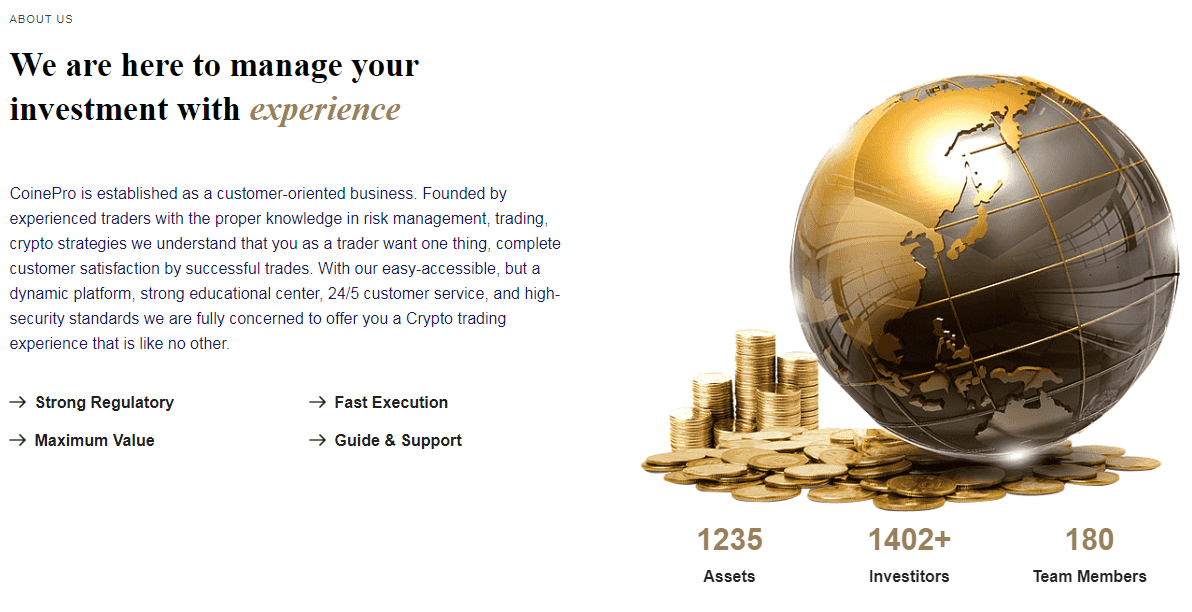 Safety concerns were among the most numerous complaints about the broker. Delayed or rejected withdrawal reports are seemingly a norm, and customers seem to be dissatisfied overall. However, that doesn’t paint the entire picture about CoinePro, as their security is even worse than the already negative reviews would tell you.

Namely, the broker pulled the extraordinarily shady trick of hiding their location. Some say they are an offshore broker, which is likely the case, but the exact location is impossible to find. As you can tell, if you can’t even track a broker down, there’s no chance you’ll get compensated if you get scammed.

To follow up on that, the broker isn’t governed by any regulatory bodies. So the safety operates purely on trust, and from the negative reviews, it’s clear you can’t trust the firm. There are many other indicators that CoinePro is a scam, and we’ll go over those shortly.

You can look at the account typing at CoinePro as a textbook example of what every scam broker does. Let’s start off with the lack of a demo account. Sometimes that’s passable, but not when you have a proprietary platform.

Next, the cheapest account requires an investment of $250. We don’t know why, but that’s commonly the exact figure scam brokers ask for. After that, the accounts get quite a bit more expensive, and not at all worth their cost.

It would do you good to memorize what’s on CoinePro’s account type page, as it’s a great indicator of what you should avoid in the future.

Also, while it’s not as bad as the rest of the issues in our CoinePro.com review, there’s a ton of typing errors and term misuses across the broker’s website. That also speaks towards their untrustworthiness, as it’s apparent they don’t really care about the quality of their service.

To further present how poorly CoinePro does, even as a scam, we should look at their trading conditions in a vacuum. That means we’ll set aside the fact that they’re a malicious company for now, and look exclusively at what they provide.

So, right off the bat, you get a proprietary platform (which you can’t test) hidden behind a $250 paywall. The cheapest account doesn’t nearly provide enough to justify that investment, and getting to the next one requires $4750 more. Needless to say, the second one is even less cost-efficient. As many CoinePro reviews state, they also falsely advertise their deposits and withdrawals as instant, while they take quite some time in reality.

So we went through the entirety of the trading experience at CoinePro without mentioning safety concerns and still couldn’t find one thing to compliment them on. Especially considering they’re a scam, we’d expect they’d try harder to draw customers in.

Some brokers try and develop platforms for themselves in order to improve upon the more standard options. Others, however, just use a proprietary platform as a shortcut, since it’s much easier to set up. You can already tell that CoinePro, as a scam broker, falls into the second group. Custom platforms like theirs are often dysfunctional and riddled with security holes, and the fact that you can’t test it out with a demo account makes it that much worse. 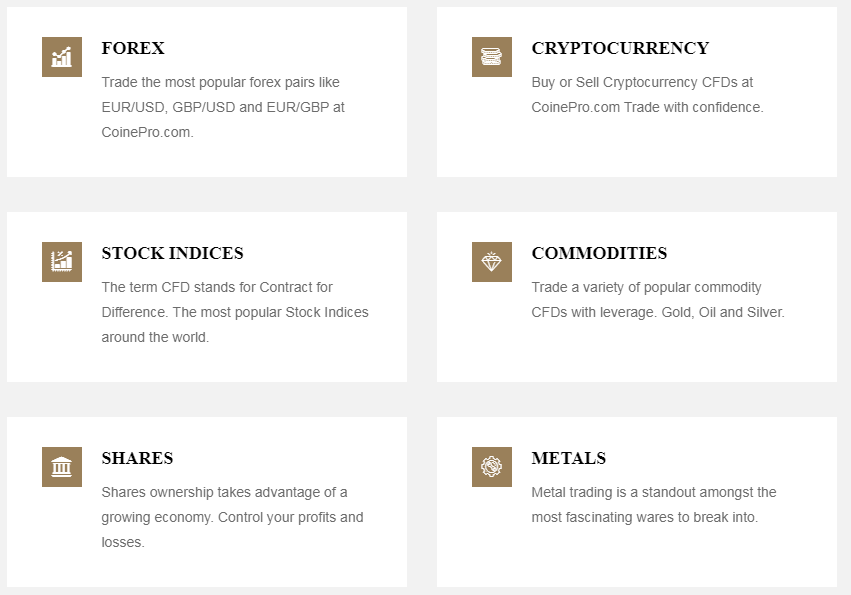 Strangely, CoinePro actually managed to make one thing on their website seem presentable, and that’s their trading product page. It contains all the asset categories they provide, along with a list of instruments under each category. Doing one minor thing right, however, doesn’t negate the fact that nearly everything else is wrong.

While trading products provided a short break from the negative nature of our CoinePro review, it was short-lasted. Their customer support options demonstrate their laziness once again, with the only option being to send them an email. Mobile Spy Apps or Spyware Apps are smartphone surveillance software. These types of apps help you to track incoming and outgoing phone calls, SMS, and locations. These apps are hidden and undetectable to the end-user. This software also tracks GPS locations, browser activity, and messages from applications like WhatsApp, Facebook, Snapchat, etc. Following is a handpicked list of best mobile spy apps for iOS and Android with popular features and website links. Select the best Spy Phone App from this list at SpyPhonemax.com! #spy app #mobile spy #spy phone tool #spyphonemax #mspy #flexispy

If you’ve read our review up until now, it’s clear that our opinion and rating of CoinePro is quite low. However, inspecting them as a broker might prove useful if you’re new in the trading world, as it might make it easier to spot brokers that are out to scam you.
As for CoinePro, we’re not sure why anyone would want to use their services. If, for some reason, you’re one of those that do, do yourself a favor and spend your money and time elsewhere.