The world’s third-largest economy published its trade data for June 2021 on Tuesday, July 20. Japan delivered its biggest trade surplus in the past three (3) months of 383.20 billion from a deficit of -189.40 billion in the prior month. The positive data came in following the year-on-year increase of 48.6% in exports which is higher compared to the 32.7% growth in Japanese imports. Despite this, investors are expected to decrease their exposure to the yen amid the rising coronavirus cases in the country. On Wednesday, daily infections rose by 4,915. The number was last seen on May 22 this year. In addition, analysts are pessimistic about the upcoming Tokyo Olympics. Many endorsers have pulled out their support for the event after a ban on spectators minimizes exposure of business brands. The 200-bar moving average at 75.810 is expected to keep prices above the psychological 75.000 area. Meanwhile, the MACD indicator is attempting a “bullish crossover”. 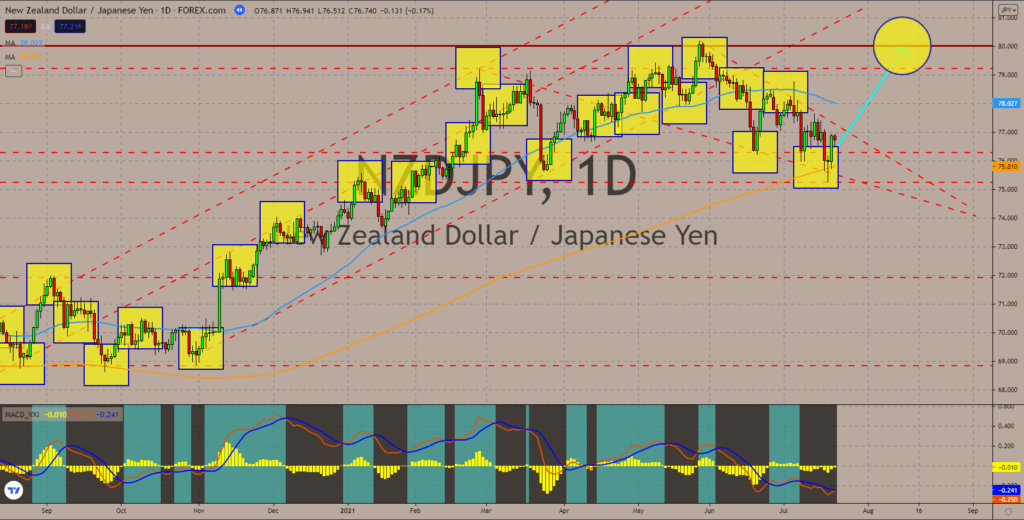 Hong Kong’s June unemployment rate represents the fourth consecutive month of decline at 5.5%. The reported figure is also the lowest in the past 13 months. Meanwhile, the CPI began to ease in the same month to 0.70 YoY. The optimistic data will help HKD compete with its US counterpart. On the other hand, the US dollar will see short-term weakness after the weekly initial jobless claims report disappoints investors. Analysts were expecting an addition of 350,000 claimants this week, but the result came in at 419,000. This was a huge drawback from the previous week’s 368,000 data. Also, the reported number represents the highest number of claimants in the past nine (9) weeks. Meanwhile, the Leading Index grew at the slowest pace in the past three (3) months in June. Prices could drop between the 50-bar and 200-bar moving averages at 7.76434 and 7.75959, respectively. The MACD could succeed with a bearish crossover on its third attempt. 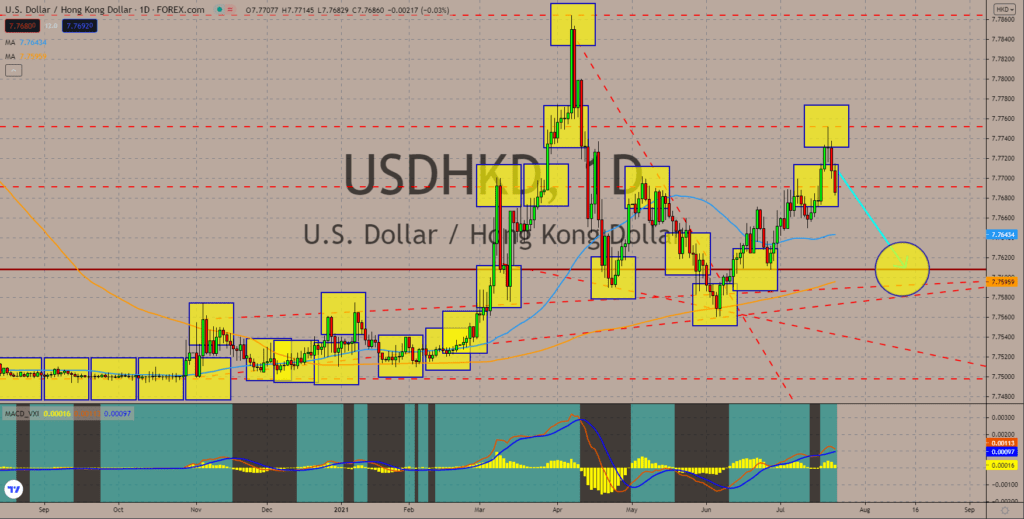 The third wave of coronavirus is threatening to undo the Singaporean government’s efforts to recover from the pandemic. On Tuesday, June 21, the island nation recorded 181 new covid cases sending the total to 63,621 or 1.08% of the 5.9 million population. On the same day, authorities raised the alert to Phase 2 wherein food and beverage outlets were suspended. Citigroup anticipates new restrictions to affect 8% of Singapore’s economy. Meanwhile, Barclays Bank downgraded their 2021 economic outlook to 6.5% from the 7.0% earlier projection. As for Bank of America, their recommendation is for investors to be liquid as the overall performance of Singapore depends entirely on the government’s response. Local businesses raised their concerns to extend support amid the possible threat of a heightened lockdown. The landmark Marina Bay Sands casino closed its operations until further notice. The 50 and 200 MAs successfully formed a bullish crossover. 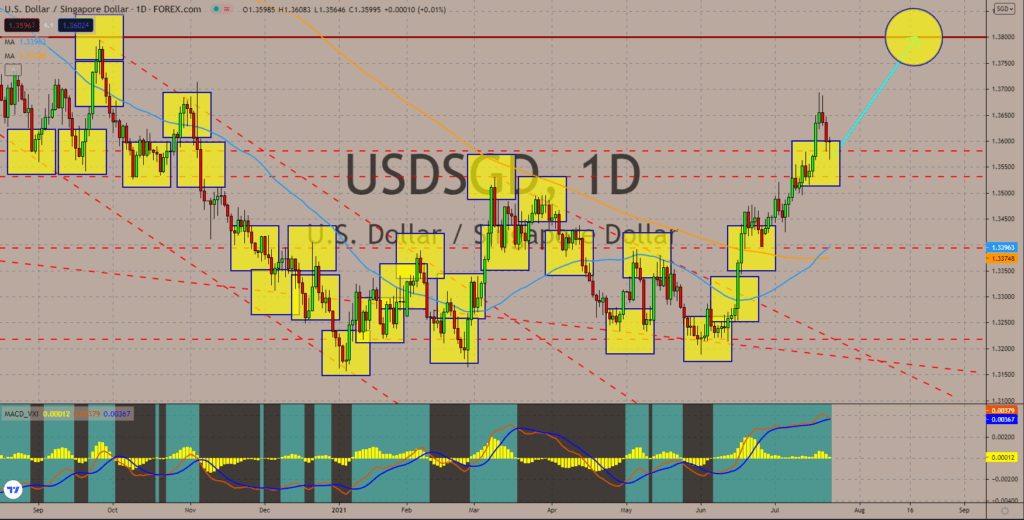 The European Central Bank kept its benchmark rate unchanged on Thursday, July 22. In addition, the deposit and lending rates were kept at -0.50% and 0.25%, respectively. Furthermore, the central bank signals an extension of ultra-loose monetary policy until inflation picks up to its annual target of 2.0%. Analysts expect the ECB to lag with the interest rate hike trend to tame inflation. Also, a possible change in mandate could further support the central bank’s accommodative policy. Chief Christine Lagarde expressed the possible inclusion of employment data in its decision-making process. Currently, the target of the ECB’s goal is to keep prices stable by introducing monetary policies. The rising covid cases could also prompt the central bank to introduce more stimulus. Prices are currently trading between the 50 and 200 moving averages as MACD shows a possible retreat in EURDKK. The MACD and Signal lines could form a bearish crossover next week. 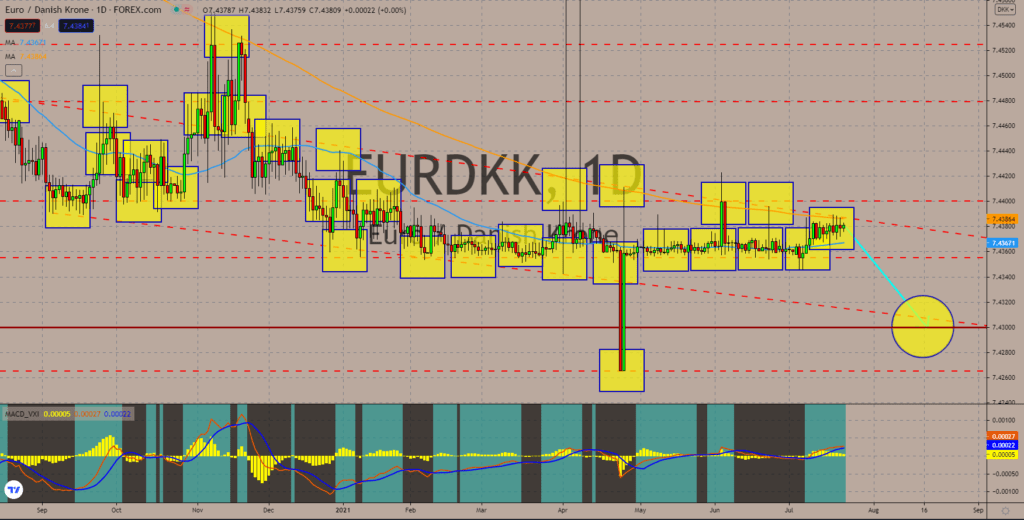