The greenback will continue to trade lower despite the clarifications given by Treasury Secretary Janet Yellen regarding interest rate. The former central bank chief said a hike should correspond to the recovery of the US, which market participants interpreted as a warning for higher inflation. In its most recent meeting, the Federal Reserve retained its 0.25% benchmark rate and reaffirmed its commitment to staying accommodative until 2023. Other figures from the world’s largest economy also show a better economic prospect in the coming months. In Q1, the GDP data advanced by 6.4%, beating projections of a 6.1% increase. Moreover, the number of claimants for unemployment benefits is expected to record 540,000 individuals on Thursday’s report, May 06. As for the employment change in April based on the non-farm payrolls (NFP) report, the projected result is 987,000 jobs created. The 50 and 200 MAs are expected to form a “bearish crossover”. 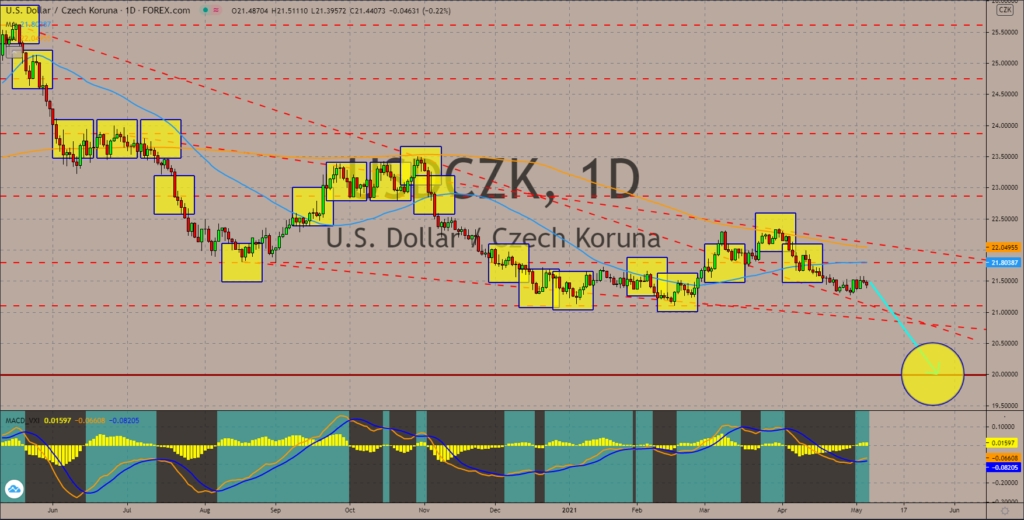 The EU and its member states posted mixed results this week. Purchasing Managers Index results from the EU economic powerhouses, Germany and France, all failed to beat consensus estimates. Berlin posted a decline to 66.2 points for the manufacturing sector, which is also the same for Paris with 58.9 points for April compared to 59.2 points prior. Meanwhile, Germany’s Services PMI contracted with 49.9 points as France jumped to the positive territory at 50.3 points, but still lower than the 50.4 points projection. As for the EU average, Manufacturing PMI shrank to 62.9 points while Services PMI surpassed both estimates and prior data at 50.5 points. While the PMI figures were mostly in the red, Germany and the Eurozone’s retail sales numbers showed massive growth in the last month of Q1. The EU’s largest economy posted 11.0% growth while the currency bloc was up by 12.0 points. The MACD indicator will continue to move lower in the coming session. 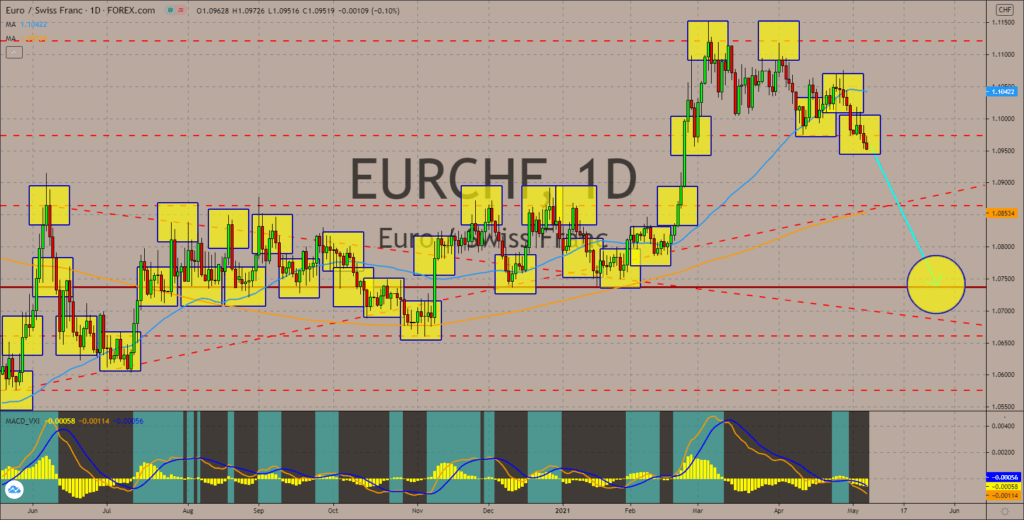 The Bank of England (BOE) retained its interest rate of 0.10% on Thursday’s meeting, May 06. At the same time, the Monetary Policy Committee reaffirmed the 875 billion quantitative easing (QE) program for May despite the bettering economic outlook in the United Kingdom. Analysts expect the central bank to be under pressure in its upcoming meeting to raise rates after Britain’s PMI data outshines its former peers in the EU bloc. Manufacturing PMI is up 60.9 points against 60.7 estimates and 58.9 points prior result. Meanwhile, the Composite and Services PMIs came in at 60.7 points and 61.0 points, respectively. While banks have tightened their mortgage lending to consumers, the amount was bigger at 11.83 billion in March. This is more than double the projected 5.80 billion by analysts. The EURGBP pair is expected to decline from the 50-day moving average supported by the downward trend in MACD indicator towards a key support area at 0.83500. 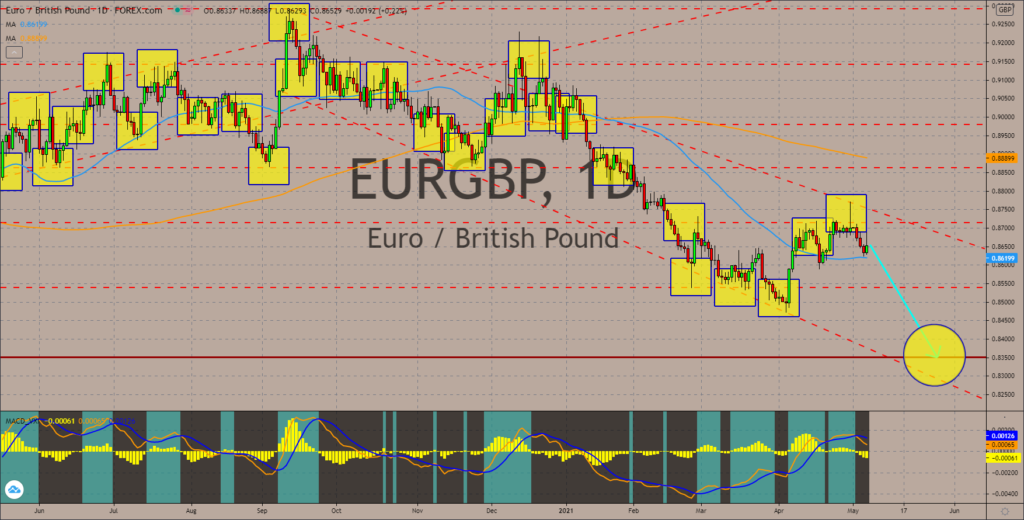 While projections for Q1 of a -3.5% to -8.8% decline is already a reason to sell the yen, the national emergency in April amidst the rising COVID-19 cases in Japan is a major reason not to be in a long position with the local currency. The pandemic continues to dampen efforts by the Japanese government and the Bank of Japan (BOJ) to keep the economy afloat. On the other hand, the top two (2) economies – China and the United States – enjoy a recovery near the pre-pandemic level. On April 29, Washington published a 6.4% growth from January to March. Meanwhile, analysts believe that Beijing will easily surpass the full-year guidance of 6.0% growth. As for the Eurozone, the optimistic forecast is coming from northern and easter Europe as Germany is also experiencing an economic slowdown of -1.7% in the first quarter of 2021. Germany’s data drags the Eurozone towards a double-dip recession. The next key resistance area is around the 140.000 price level. 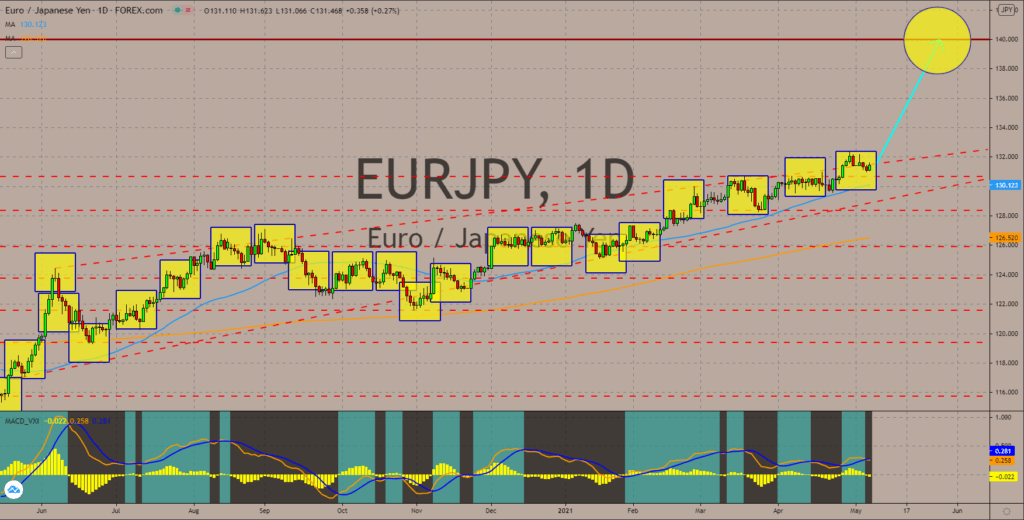