On Monday, the most significant manufacturing exporter decided to replace CEO Dennis Muilenburg. Boeing which is one of the symbols of the U.S. economy is struggling to regain the trust of regulators, customers, and the public. Two fatal incidents created many problems for the world-famous company.

This decision comes at a time when Boeing failed to contain one of the biggest crises in the history of the company. Boeing 737 and its different versions are the only narrow-body airplane produced by the U.S. company. Moreover, it generated billions of dollars as 737 and the newer version is popular across the globe.

However, 737 Max remains on the ground for more half a year. As a result, airlines lost millions of dollars in revenue. Additionally, Boeing is in a difficult situation as it is hard to compete against its main rival Airbus when its bestselling planes remain out of service.

On Monday, CFO Greg Smith, who became interim CEO, explained the board’s decision to employees. According to this note, the Board made the decision that the best way to restore confidence in the company was to change the leadership.

Muilenburg was relieved of his duties immediately. In several weeks, David Calhoun will become the next CEO.

In December, the Federal Aviation Administration (FAA) criticized Boeing for its handling of the situation. According to FAA, Boeing was pushing an unrealistic timeline for the planes to return to service. The date when the 737 Max will resume flying remains unknown. Airlines had to change their schedules to compensate for the lack of airplanes.

On Monday, shares of Boeing increased by nearly 3%. The news about the new CEO had a positive impact on the stock markets. However, shares are still down by 20% since March.

Boeing and the current crisis 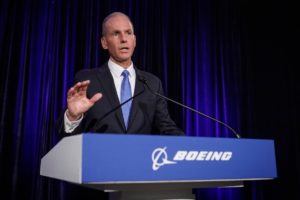 The former CEO failed to meet the expectations. Nevertheless, Boeing was reluctant to replace despite the pressure to let him go. Two fatal incidents sparked numerous investigations including a federal criminal probe about the aircraft’s development and certification.

This month, Boeing decided to suspend the production of the Max 737 in the first quarter of 2020. Moreover, FAA’s chief stated that he wouldn’t rule out fining Boeing as it failed to disclose the information about the 737 Max.

Pilots, as well as flight attendants, advocated for this decision for a long time. Dennis Tajer who is a spokesman for the Allied Pilots Association commented on this news. According to Tajer, by changing the management, this won’t solve all the problems. The company should work harder to regain trust.

For example, Pilots weren’t told about flight-control software. This is a very serious issue, as pilots should be aware of every system installed in the airplane.

The President of the Association of Flight Attendants also supported this decision. Sara Nelson is the president of this association, which represents 50,000 cabin crew. She thinks that it took a lot of time to replace the CEO.

New CEO David Calhoun will have to reassure regulators and customers that Boeing is ready to deal with the situation.