Economy: Unemployment as a Risk to Stability

Home » Economy: Unemployment as a Risk to Stability

The Communist Party of China is the ruling political party since 1949. During the last 70 years, China transformed from the agrarian to society to the industrial powerhouse. Moreover, its economy is the second-largest in the world. Millions of people improved their living standards and government plans to eradicate poverty.

However, without a strong economy, the Communist Party may lose the support of the local population. Deteriorating economic conditions may cause social unrest and the government is aware of this precarious situation. The government made clear that it plans to do whatever it can avoid this scenario.

One of the biggest challenges is to keep the unemployment level under control. Slowing economy along with rising debt and falling domestic demand, are some of the problems that can make it harder to accomplish this goal. Let’s not forget about the trade war with the U.S.

Moreover, the Five-Year plan will come to an end in 2020, so it is the last year of the government’s 13th Five-Year plan. As a result, the Communist Party is motivated to achieve those goals in 2020.

Usually, officials are reluctant to use words that may indicate serious problems. However, this time China’s State Council underlined the importance of employment. State Council urged local governments to take measures to avoid massive job losses in 2020.

Additionally, the chief administrative office issued a warning. According to the information, China could face what can be described as social unrest and riots. It won’t be an over-exaggeration to say that such words are rarely used in public government documents. This revelation once more underlines the importance of jobs to the government. 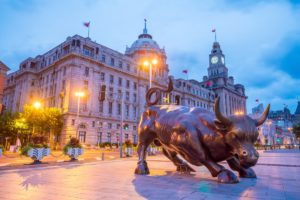 This year only started less than two weeks ago. To have a better understanding of the current situation, it is important to have a look at how the economy performed in 2019. Based on the information, China is expected to provide its full-year growth figures in several days on Friday.

Currently, the latest data available dates to the third quarter. According to this data, GDP growth fell to the lowest level since 1992. Nevertheless, the government planned to achieve, at least 6% to 6.5%. growth in 2019.

Unfortunately, economic problems are not over yet. The chief economist from Essence Securities Gao Shanwen stated China’s economy would continue to grow in the next decade but at a slower pace.  He expects the economy to keep growing but it won’t surpass 5% on average. Moreover, it will be hard to sustain at least 4%.

As mentioned above, this is not an easy task, as debt reached extremely high levels. Meanwhile, Chinese consumers must deal with problems connected with the prices of housing, pork.

Trade war created many problems, but it is only part of the problem. There are other issues, as well.

Chinese government poured billions of dollars in the economy. The government is using fiscal stimulus to improve the situation. For example, it plans to spend $400 billion on railways, highways, and other infrastructure.

Moreover, the government heavily invested in the banking system.

Also, China decided to open its economy to foreign companies. This way, it hopes to attract foreign investment.

To sum up, the Chinese government is ready to take decisive measures to keep unemployment as low as possible.