Economy: WeWork is fighting for survival

WeWork is a U.S. real estate company, and in nine years after founding, it offers its services around the world. This company provides shared workspaces. It has clients in many different spheres. Customers have the opportunity to use their co-working spaces in 86 cities and 32 countries.

This company had an ambitious plan for the future. WeWork had the ambition to offer IPO. However, six weeks after applying for Initial Public Offering, this company is in a tough situation. Let’s have a look at why the company which had $47 billion valuations is trying not to go bankrupt.

This story illustrates that even such big companies as WeWork should be careful when it comes to finances. Everything started in 2010 with a small company. However, right now company employees 12,500 employees.

The company had a plan to transform the industry. Nevertheless, the situation is different, and at the moment the company needs money to save its business. As mentioned-above, WeWork filed the registration documents in August 2019. The Securities and Exchange Commission received the document that was supposed to be the critical step to move toward the IPO.

Nevertheless, WeWork had to abandon this plan in 33 days after filing the documents. The serious problems started after submitting the papers. As investors, journalists, analysts began to learn more about the company. The more information became available to them the better they understood that WeWork was facing huge issues.

The problems included financial losses as well as a potential conflict of interests, etc. The 359-page document submitted to the Securities and Exchange Commission contained a very interest part about its future. This section is almost 30 pages and is about the risks to investors.

WeWork and the risk of bankruptcy

At the moment, WeWork is in a very peculiar situation. On the one hand, it needs money to avert the threat of bankruptcy. On the other hand, to achieve this goal it first has to receive money from its biggest sponsor SoftBank.

It is essential to mention the CEO of this Japanese bank is Masayoshi Son. He has a unique strategy when it comes to investing in startups. He invested billions of dollars into startups. He encouraged these startups to spend huge amount of money on becoming the leaders of the market.

Such a strategy proved controversial as one of the examples of how this plans plan backfired is WeWork. However, Son invested in another ambitious startup as well, and this startup is Uber. It is an interesting fact that ride-hailing company Uber was unable to live up to expectations.

The possible solution to WeWork’s problem 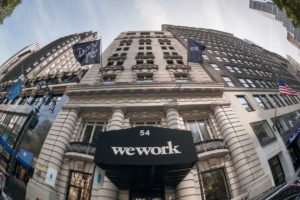 There is a solution that not entirely but for a certain degree will improve the situation. This week WeWork started negotiations process with SoftBank to obtain $1 billion. The company needs this investment as otherwise, it will be hard to negotiate a $3 billion debt deal with JPMorgan Chase&Co.

However, without Softbank’s investment, it will be harder to reach an agreement with JPMorgan. Nevertheless, even a successful deal with SoftBank and JPMorgan may not be enough to improve the reputation of WeWork. In 2018, the company lost $1.9 billion. During the first six months of 2019, it already lost $2.36 billion. The company has to do something to stop this from happening again in the future.