On Thursday, the European Central Bank (ECB) announced that it will increase its Pandemic Emergency Purchase Programme (PEPP) by 600 billion euros ($672 billion). The central bank wants to support the region’s economy. It is not surprising as the coronavirus pandemic continues to affect the economy.

Importantly, several months ago more precisely in March, the ECB announced it allocated 750 billion euros of government bond purchases. As a result, in total the central plans to spend 1.35 trillion euros on its Pandemic Emergency Purchase Programme. Moreover, the ECB extended the duration of its bond-buying program from the end of 2020 until June 2021. Also, the bank may prolong the program until it believes the crisis is over.

Interestingly, the ECB’s emergency program helped to keep borrowing costs lower for countries in the euro zone. As a reminder, 19 countries are part of the euro zone. Moreover, the latest announcement helped to lower borrowing costs. For example, the yield on Italy’s 10-year government paper dropped from session highs above 1.56% to 1.40% following this announcement. 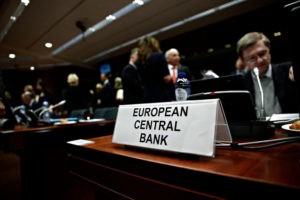 According to the European Central Bank, it expects headline inflation to be 0.3% in 2020 and 0.8% in 2021. Both numbers are well below the ECB’s mandate to drive inflation close buy below 2%.
Importantly, compared to the ECB’s forecasts that date back to March, the latest projections paint a dire scenario.

Moreover, the ECB president Christien Lagarde said that the forecasts were dependent on the duration of the pandemic. Another factor is the effectiveness of policies taken in different parts of the region.

Furthermore, the ECB’s emergency package also includes measures designed to boost bank lending, in addition to other steps taken before the pandemic to support low inflation levels in the region. Moreover, this also includes monthly purchases of 20 billion euros in government bonds as part of the quantitative easing plan announced in 2019.

On Thursday, the European Central Bank also announced that it made the decision to keep its interest rates unchanged. As a result, the rate on the main refinancing operations stands at 0%. Moreover, the marginal lending facility stands at 0.25% while the deposit facility stands at -0.50.

Hopefully, the ECB is ready to take steps to boost the region’s economy.