In our last article, we looked over some of the most popular basic chart patterns worth knowing. This included head and shoulders patterns, cup and handle patterns, and double top and bottom patterns. These would give one a basic idea of how to analyse charts for clues on the future movements of a market. In this article, we would like to continue introducing more useful, and slightly more advanced, chart patterns worth exploring.

As we mentioned, in the last article we introduced double tops and double bottoms. There, the valuation reached a support or resistance (bottom or top) two times in a row. As you can probably guess, triple tops and bottoms are when we see the valuation meets these points three times in a row. Triple bottoms indicate likely to indicate a price reversal but may also hint at that the valuation will find a new, higher, resistance. Triple tops are the opposite, meaning it signals a downward reversal and a new support level. These both signal traders being dogmatic to a point of view before peoples’ opinions almost completely reverse. The fact is, this chart pattern is not especially common, so it can be quite a strong indicator when it does appear. 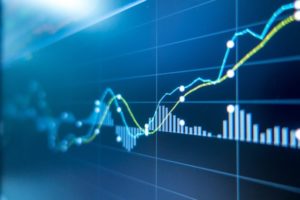 These chart patterns also indicate a reversal happening soon. What you will see is the value of an asset swinging up and down, but in an overall upward direction, but the range of change will also decrease over time. Therefore, it is slowly converging to a single point, after which it reverses downwards. At least, that is the pattern you will see with a rising wedge. Of course, a falling wedge would show an overall decreasing price movement, indicating a sudden rise.

If you were to draw two lines to highlight the movement of the price, you would see a cone or “wedge” shape. Thus, the name.

This chart pattern has two components that you will see. The first is a sort of flagpole, with a very direct and fast movement in one direction, either up or down. The second part is the flag or “pennant”, which will adorn the flag pole. It looks much like the wedge patterns we discussed previously, although likely smaller. The price oscillates for a while, converging at one point. It shows a period of time when traders show uncertainty because of just how quickly an asset’s value has risen.

Following this part, unlike the wedge, we expect to see the price to continue climbing in the same direction as before, in the flagpole. How “long” the flagpole can actually indicate the possible future price point. The part following the pennant is almost a copy of the flagpole. Therefore, the new price will likely be the consolidation point of the pennant plus the flagpole length.

A flat base pattern is generally an indicator of a continuation in the long term. It shows up after a price is moving direction (a sudden tally or drop), and appears to be a general pause. Let us explain further. What you will see is the price oscillating in a relatively tight range, without converging, for an extended period of time. This shows temporary uncertainty or weakness in a market, not yet ready to push on further. Therefore, a small pause takes place. After this, prices will likely rise in the same direction as before when the market feels ready. 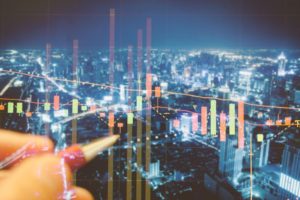 There are a few chart patterns one could describe as “triangles”. They follow the trendlines of an asset. Like with the wedge and the pennant beforehand, you will see two trendlines slowly converge on one point.

This first triangle showing the upper and lower trendlines meeting in the middle, as demand and supply meet and equilibrium. This indicates a breakout is likely to occur soon, but it does not indicate if the price will go up or down.

The most important thing you should keep in mind is that these patterns are not guides. They are indicators of what may happen given what these patterns usually indicate. You have to combine your knowledge of an asset and your experience in trading to make an informed decision.