One of the largest car producers in the world is trying to end the strike initiated by United Auto Workers. The strike started in Mid-September and is not over yet. It is worth mentioning that this strike had a serious impact on GM.

It is worth mentioning that more than 170,000 employees around the world. General Motors is the owner of such companies as Chevrolet, Buick, GMC, Cadillac, etc. Another interesting fact about this multinational corporation is that it was established more than a century ago. Nevertheless, the corporation continues its daily operations in 2019.

GM is one of the symbols of the U.S. automobile industry. In 2009, as a result of the financial crisis, GM went bankrupt. However, with the help of U.S. government company managed to return to the automobile industry. It was not an easy task, but the corporation nevertheless was able to overcome the problems.

However, it does not mean that General Motors solved all of its problems. Ongoing strike is a reminder that this century-old corporation is still facing a lot of issues. It is important to mention they have to deal with the powerful labor union.

The United Automobile Workers is a famous American labor union. According to UAW, it has 390,000 active members across the U.S as well as Canada. Also, there are more than 600,000 retired members. The UAW dates back to 1935. In more than 80 since starting its activities, UAW became as one of the most recognizable unions in the automobile industry. The current strike once more underlines its importance when it comes to the negotiations process with the employer.

The strike and its impact on GM 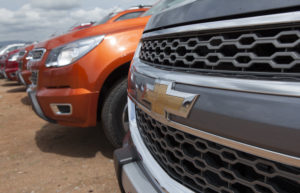 On September 16, 48,000 employees of GM declared a strike. Employees who refuse to work is a problem for any company. However, when we are talking about one of the biggest car producers in the world financial losses may reach millions.

That was the case of GM. According to analysts, each day the company is losing about $100 million. It means that due to the ongoing strike GM lost more than $500 million which is a massive sum of money even for this corporation.

As mentioned-above UAW members are protesting against the current state of affairs in the corporation. The hourly workers in the company are asking for better salaries. Also, they demanded greater job security as well as protection of health insurance.

There are other issues, as well. For example, to shorten the period which is required to reach the UAW pay scale. It is important to mention that right now it takes eight years to receive this salary which is $31 an hour.

The officials from General Motors have their point of view regarding these problems. They said that GM is not going to abandon its U.S. employees. They released the details of an offer. According to this offer, GM will invest $7 billion in U.S. plants. Also, a corporation is ready to offer better profit sharing, and they promised to increase the salaries on a yearly basis.

There is a chance that General Motors and UAW will reach an agreement until the end of this week. The new labor deal will solve most of the problems.