The greenback was steady on Tuesday as fresh concerns about the US-China trade war buoyed safe haven currencies, although the moves were subdued as investors wait for further cues from the Federal Reserve about policy direction.

Another factor that dragged down risk sentiment were the comments coming from US President Donald Trump on Monday that seemed to hose down hopes of a trade resolve with China, the world’s second-largest economy.

During an interview, Trump said that he expects to go ahead with increasing tariffs on $200 billion in Chinese imports to 25 percent form 10 percent at present.

The US dollar index, which tracks the strength of the greenback against a basket of six other major currencies, held firm at 97.01, trading near its highest level since November 15.

The dollar has appreciated over the previous two sessions as investors sought the safety of the world’s most liquid currency on fears that the global economic recovery was losing traction.

“Structurally, the latest bout of dollar resilience at this juncture is borne out of market nervousness and not from any renewed Fed hawkishness,” said Emmanuel Ng, who is a currency strategist at OCBC Bank in a note.

Attention is also focused this week on a speech on Wednesday by Fed Chairman Jerome Powell and minutes from the central bank’s November 7 to 8 meeting to be released on Thursday, for further indications on how many more times the Fed is likely to increase interest rates.

“Markets are really keen on what Powell has to say given there has already been a sharp adjustment in Fed hike expectations,” said Nick Twidale, who is the chief operating officer of Rakuten Securities. “We see an acknowledgement of slowing global growth as negative for the dollar.”

The Fed is believed to be raising interest rates by 25 basis points in December but the key debate prevailing in the market now has something to do with the pace of the US central bank’s monetary tightening strategy in the coming year.

Twidale cautioned that the dollar could see safe haven buying if there is no positive news from the scheduled G20 meeting to be held in Buenos Aires on November 30, where Trump and Chinese President Xi Jinping are likely to discuss contentious trade issues. 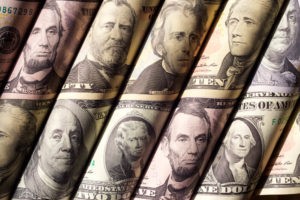 On the other hand, investors also see the dollar’s rally potentially losing steam if slowing growth compels the Fed to stop its monetary tightening cycle sooner than expected.

The Australian dollar, which is usually considered a barometer for global risk appetite, was a tad higher at $0.7226 but well off Monday’s peak as rising trade tensions hit sentiment. The Aussie dollar has shed 1.5 percent of its value over the past six trading days.

The yen, which is also a safe haven currency, traded at 113.43, with the greenback losing 0.12 percent versus the Japanese unit on Tuesday.

However, analysts expect the yen to weaken against the dollar due to the divergence between the Fed’s and the Bank of Japan’s monetary policies. While the Fed is on a monetary tightening path, the BOJ remains committed to its ultra-loose monetary policy due to low growth and inflation.

The dollar has gained 1.1 percent over the Japanese yen in the previous five trading sessions.

The euro was a shade higher versus the greenback to $1.1335 in Asian trade. It shortly reached hit an intra-day high of $1.1383 on Monday after signs that Italy may cut its budget deficit target to satisfy the European Union.

The common currency later gave up its gains due to weaker than expected economic data out of the euro zone.

The British pound dropped 0.2 percent to $1.2807 on Tuesday as Brexit concerns weighed on the currency. Under a deal that was secured with the EU on Sunday, Britain will leave the bloc in March with continued close trade relationship.

On the other hand, Prime Minister Theresa May faces tight opposition getting it approved by a divided parliament.

The dollar rose 0.07 percent versus the Canadian dollar, which changed hands at C$1.3258, as oil prices plunged on Tuesday after recouping some losses the day before. Canada is one of the largest oil exporters in the world.