Tesla, which is one of the most famous electric car producers in the world, reached another milestone. For the first time history, Tesla Inc’s stock market capitalization surpassed the combined values of General Motors Co and Ford Motors Co.

On Wednesday, more precisely, on midday, electric car maker’s stock rose about 4% and reached a record high as the market capitalization jumped to $88 billion. As a result, its market cap is $2 billion larger than General Motors and Ford stock market values. GM’s market value is $49 billion while Ford’s market value is $37 billion. 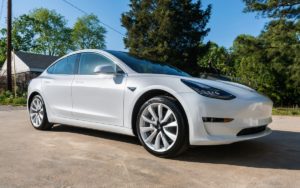 Let’s have a look at the factors that helped the Silicon Valley company to surpass two major U.S. carmakers. One of them is the third-quarter profit that exceeded the market expectations.

Moreover, the company managed to speed up the process of car deliveries in the fourth quarter. Also, people should take into consideration that Tesla opened a factory in China. Thus, Tesla’s stock nearly doubled in the past three months.

Thanks to the factors mentioned above, Tesla was able to defy short sellers as well as other traders who were not confident in this company. They expected that GM and Ford would overtake Tesla, but their expectations turned out to be incorrect.

Tesla outpaced its U.S. rivals even though they delivered more cars than Silicon Valley-based company. For example, GM, as well as Ford, delivered more than 2 million automobiles, each only in the United States. Meanwhile, in 2019 Tesla delivered 367,500 vehicles around the world.

In the past 12 months, the shares of General Motors did not change much. At the same time, the shares of Ford increased by 10%. The shares of both companies are underperforming. Moreover, problems caused by falling car sales in China had a negative impact on investor sentiment.

This year Tesla began delivering Tesla 3 electric cars built in Shanghai. This factory will help to boost sales in China.