The Asian financial hub is struggling to deal with economic problems. It is trying to save its slumping economy as protests along with coronavirus outbreak represent a serious challenge for Hong Kong.

On Wednesday, Hong Kong’s government made an unusual decision. It plans to give 10,000 Hong Kong dollars (about $1,280) to all permanent residents in the city who are at least 18. As a result, about seven million will benefit from the program.

This measure is a part of the 120 billion Hong Kong dollar ($15.4 billion) stimulus package.

Financial Secretary Paul Chan also made an interesting comment regarding the situation. According to Chan, the city will record its first budget deficit in 15 years due to the recession. The recession began in the third quarter of 2019.

Moreover, there is a chance that the situation would deteriorate in the future. For example, the deficit for the next fiscal year through March 2021 is expected to reach around 4.8% of the GDP.

Hong Kong has to deal with enormous challenges. The financial secretary mentioned several challenges during a budget presentation. In 2019, demonstrations, as well as the trade war between the U.S. and China, affected the local economy. Let’s not forget about slowing the global economy as well. 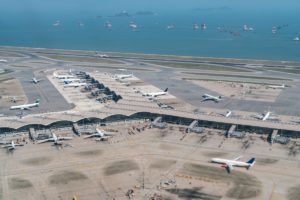 All of the factors mentioned above pushed Hong Kong into a recession. In 2019, the economy fell by 1.2%. Consequently, the city’s economy declined for the first time since the global financial crisis.

Moreover, the spread of coronavirus is a severe challenge to the local economy. The government is working hard to stabilize the situation. Some of the money for the relief package will come from a special fund. This fund was established due to the deteriorating economic and employment conditions caused by the coronavirus outbreak.

Also, the government decided to reduce the income tax for some residents. As a result, 2 million taxpayers will have to pay less money. Moreover, authorities plan to give low-income residents of public a month of free rent. This is not the end of the story, as the government will provide a one-off allowance to 200,000 underprivileged households.

Hopefully, Hong Kong has the opportunity to afford such projects as it has about $145 billion in fiscal reserves.

The city’s government is trying to boost the local economy for months. It already implemented several rounds of stimulus and allocated more than 30 billion Hong Kong dollars ($3.9 billion).

Fortunately, Hong Kong’s economy will be able to bounce back in the long run.