Hong Kong’s economy and the Risk of Coronavirus Outbreak

Home » Hong Kong’s economy and the Risk of Coronavirus Outbreak

Hong Kong is one of the main major financial hubs in the world. However, violent protests, as well as protracted trade war, affected the local economy. The result was the first recession for the first time in a decade in 2019.

Moreover, the coronavirus outbreak is another serious challenge for the economy. On Monday, officials said Hong Kong’s economy contracted 1.2% last year as protests paralyzed the city. Furthermore, the demonstrations had a negative impact on the tourism industry.

Hong Kong hoped to improve the situation in 2020 as demonstrations became less frequent as well as phase one trade deal. The Asian financial hub had the opportunity to benefit from the trade deal. Nevertheless, the risk of coronavirus outbreak seriously endangered this chance.

Authorities had to cancel school as well as to take other measures to contain this virus. Hopefully, the number of patients remains quite low as there are only 14 confirmed cases. Nevertheless, the memory is fresh when it comes to the outbreak as the SARS crisis in 2003 caused the city’s economy to decline by 0.5% in the second quarter. It took several months to recover from the crisis.

Despite the political unrest, the hospitality industry started to recover in December, but coronavirus further complicated the situation.

It is important to mention that the number of people who visited Hong Kong in November 2019 plunged by nearly half compared with the same period in 2018.

Usually, most of the tourists come from mainland China. However, authorities-imposed travel restrictions in certain parts of mainland China. Hong Kong also some of its border crossing to stop the virus from spreading. 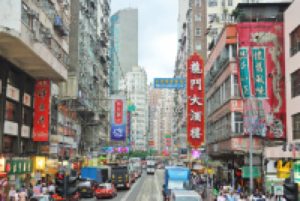 It is not surprising that the ongoing situation is far from being ideal. Last week, on Friday, Goldman Sachs made the decision to cut its forecast for Hong Kong’s economic growth.

According to the updated information, Hong Kong’s economy would increase by 4% instead of 5.6%. The analysts of the investment bank underlined the importance of coronavirus outbreak to the tourism, hospitality, and other industries.

Additionally, the bank warned that a prolonged outbreak could lower full-year economic growth to 5% or less.

This coronavirus outbreak represents a severe risk to the economy of China. Hong Kong has some level of autonomy from mainland China, but this may not be enough to protect the local economy.