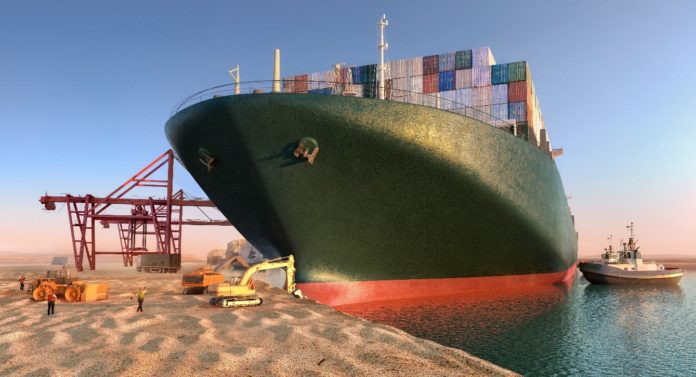 A huge container ship blocking Egypt’s Suez Canal for almost a week has been somewhat refloated.

The Suez Canal Authority (SCA) declared that raising optimism and the active waterway will soon be revived for a significant ship accumulation.

The 400-meter (430-yard) long Ever Given became clogged diagonally across a southern part of the canal in high winds occurring last Tuesday, blocking traffic on Europe and Asia’s quickest shipping route.

After additional dredging and departure over the weekend, rescue workers from the SCA and a team from Dutch company Smit Salvage conducted to free the ship using tug boats in the early hours of Monday. Two marine and shipping sources stated.

The SCA said Ever Given had primarily been arranged along the canal’s eastern bank, and further tugging operations would return once the tide lifts later on Monday. Marine traffic through the channel will restart once the ship is delivered to the lakes area – a more extensive section of the canal, it continued.

High-pressure water would be injected below the ship’s bow, which is still stuck, to separate sand and clay. Still, if that was useless, containers might have to be separated from the ship, which would cause a considerable delay, he replied.

A source included in the salvage operation informed Reuters that they were re-ballasting the ship and demanded that the cargo would not need to be removed with a favorable tide.

Video footage posted on social media revealed the ship had swung around, clearing space in the canal. Other footage, filmed at dawn, included celebratory cheering and horns from the tugs encompassing the boat.

Crude oil prices fell after the progress in refloating the ship, with Brent crude down about $0.45 per barrel to $64.12. Shares of Taiwan-listed Evergreen Marine Corp – the vessel’s owner – developed 1.75%.

Nearly 15% of global shipping traffic transits the Suez Canal, an essential source of foreign currency income for Egypt. The stoppage is losing the canal $14-$15 million per day.