Japan’s Economy Entered Recession as a Result of Q1

Home » Japan’s Economy Entered Recession as a Result of Q1

Japan is one of the most developed countries in the world and retains this status for decades. It has the third-largest economy around the globe. Moreover, not a very long time ago it had the second-largest behind the U.S.

However, the local economy was struggling even before the coronavirus pandemic. However, the pandemic created additional pressure on the economy. According to government data, Japan’s economy shrank 0.9% in the January-to-March period compared to the prior quarter. It is the second straight quarter of decline. As a result, Japan entered a recession.

As a reminder, the world’s third-largest economy shrank 1.6% in the fourth quarter of 2019. Let’s get back to the latest data. Importantly, the drop was more dramatic, a 3.4% fall when it comes to annualized rate.

It is no secret that Japan’s economy was already struggling before the outbreak. Moreover, economic activity contracted late last year. It makes sense as the country absorbed a sales tax hike as well as struggled with the aftermath of Typhoon Hagibis. This powerful storm hit the country in 2019.

It is worth noting that it will take time to analyze the situation. The virus started to affect the country in early 2020. However, the first quarter does not capture the full effect of the pandemic. 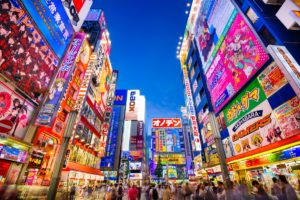 Notably, the sharp fall in the first quarter of 2020 highlights the impact of the coronavirus pandemic on economic activity in March. Moreover, this is not the end of the story as in the second quarter of 2020, the coronavirus will continue to influence the economy. It is expected that the second quarter will be even harder compared with the first quarter.

Interestingly, private consumption contributes to more than half of Japan’s economy. Moreover, private consumption fell 0.7% and that was before the lockdown. The country’s government-imposed restrictions to contain the spread of the virus. Japan was not the only country to make such a decision as countries around the world also introduced measures.

In the first quarter of this year, exports shrank 6% and it was the sharpest contraction for that sector since 2011. It is not surprising as goods bound for the major trade partners stagnated. As a reminder, exports represent up to 16% of Japan’s economy.

The Japanese government already announced a roughly $1 trillion stimulus package to protect the economy from the problems connected with the coronavirus pandemic. Importantly, $1 trillion equals about 20% of Japan’s annual output. Also, the government is likely to announce even more measures until the end of the month.