JetBlue and its Mission to Modernize the Corporation

Home » JetBlue and its Mission to Modernize the Corporation

Last week one of the most famous airlines from the U.S. released the information regarding the fourth-quarter results. JetBlue Airways Corporation, stylized as JetBlue, is the sixth-largest airline in the U.S.

On Thursday, JetBlue released the fourth-quarter results. This news had a positive impact on the JetBlue shares as on January 23, shares increased by 4.7% to $20.72 and outperformed stocks of other airlines.

One of the major factors that helped to boost the shares relates to JetBlue’s ambitious plan to reduce the costs.

The New York-based corporation was able to reduce the costs by $314 million over the past three years. Interestingly, JetBlue exceeded the cost-saving target.

Total operating revenue rose by 3.2% to $2 billion in the fourth quarter compared with the same period in 2018.

As a reminder, JetBlue’s business model depends on fares, which makes it possible to compete with legacy airlines.

However, renegotiated contacts for engine maintenance, as well as transition to an all-Airbus fleet, helped to surpass the target.

Engine maintenance is very expensive as the airline has to spend from $325 to $350 million a year to maintain its fleet. 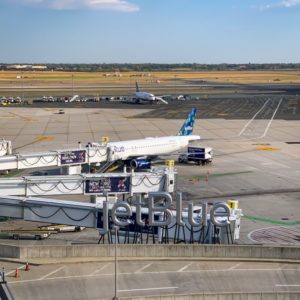 JetBlue wants to offer its services outside of North and South America. In 2021, it plans to launch a service to London.

Currently, it flies to 102 cities in the United States, Caribbean, and Latin America. Furthermore, the airline plans to increase its capacity by between 5.5% and 7.5% this year.

The airline offers perks such as extra legroom in coach and free Wi-Fi. Thus, the corporation should balance between product and cost.

Thanks to positive results, the airline will have the opportunity to offer budget-friendly airfares over the next decade. It is not an easy task, but JetBlue remains competitive in the market.