The once-thriving aviation industry is trying to cope with various challenges. Moreover, the primary goal of many airlines is to avoid bankruptcy. However, not all of them will survive the coronavirus crisis. Recently, Colombia’s national airline Avianca has filed for bankruptcy protection in a court in New York.

It is worth mentioning that, Avianca is the second-largest carrier in Latin America. However, its passenger operations have been grounded since March due to the coronavirus pandemic. As a result, more than 140 of its aircraft remain on the ground for an extended period of time. In March, Colombian President Ivan Duque closed the country’s airspace.

The income of Colombia’s national airline fell by 80%. Moreover, it was struggling with high fixed costs. Importantly, if Avianca fails to come out of bankruptcy, it will become the first major airline to disappear due to the coronavirus pandemic.

According to the statement released by the company, it filed for Chapter 11 bankruptcy protection in a court in New York. Notably, the process postpones a U.S. company’s obligations to its creditors. Moreover, the company will have time to reorganize its debts or sell parts of the business.

Chief executive Anko van der Werff commented on this topic. According to the chief executive, the company made this decision to improve the situation. As a result, a New York-listed airline will emerge as a better airline and will continue to operate for many years.

Avianca and the future of the aviation industry 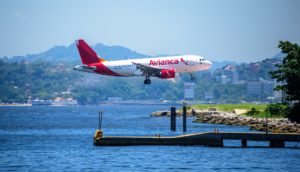 Avianca is not only the second-largest airline in Latin America, but it is also the second-oldest airline that continues its operations. As a reminder, the oldest airline on the market is the KLM flag carrier of the Netherlands. Moreover, it is part of the Air France-KLM group. Furthermore, KLM continues to operate under its original name since 1919.

Interestingly, it is not the first time when Avianca decided to seek bankruptcy protection. It filed for bankruptcy in the early 2000s.

It is no secret that the coronavirus pandemic had a dramatic effect on the aviation industry. The governments imposed travel restrictions to limit the spread of the virus. Consequently, global air travel fell by 90% based on the information provided by the International Air Transport Association. Moreover, the association predicts Latin American airlines will lose $15 billion in revenues in 2020.