Cryptocurrency prices continued to go up after slumping down to fresh record lows on Tuesday, with bitcoin still a spitting distance from a 14-month low and Litecoin higher 7.7 percent from the previous close.

Over the previous seven days, Litecoin has witnessed a drastic drop in value, as it shed more than 21 percent. The volume of Litecoin traded in the twenty-four hours was $535.958 million or 2.84 percent of the total volume of all cryptocurrencies. it has traded in a range of $27.6688 to $38.7357 in the past 7 days.

Fortunately, Wednesday saw a better performance for the cryptos. Bitcoin and other major digital coins’ prices is higher on Wednesday, while Goldman Sachs said it is not any closer to offering crypto trading services as regulatory barriers prevent holding of crypto assets.

Meanwhile, Litecoin traded 7.7 percent higher to $32.826 on the Bitfinex exchange.

In spite of the day’s gains, bitcoin has still shed around 30 percent of its value during the past ten trading days. Virtual coins started falling in mid-November during a hard fork in Bitcoin cash, as investors worried that it could drive down demand for the coin. Other analysts cite a slump in crypto miners as the reason for the sudden selloff. 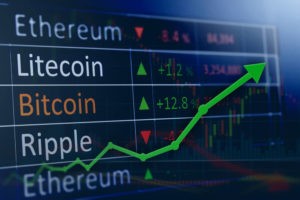 Also in the day, a report said that Goldman Sachs still isn’t any closer to offering crypto-related services in spite of the client’s demand.

“One of the things they ask me is ‘Can you hold our coins?’ and I say ‘No, we cannot,’” said Justin  Schmidt, who is the bank’s head of digital asset markets, said during a conference in New York.  “One of the things we have to take into consideration when we’re building out our business is what we can and cannot do from a regulatory perspective.”

Last year, it was reported that Goldman was considering putting up a trading desk to make markets in digital currencies.

Schmidt added that the bank’s clients are “quite curious” about the space and its price changes and how to keep assets safe. On the other hand, Schmidt said “there are things that are more limited in terms of what we can offer” from a regulatory perspective.

“What I really want to see is the continued research and development of actual products and services,” Schmidt said. “In many ways, the rampant speculation that has been quelled over the past several months is really healthy for the ecosystem and I very much look forward to companies that are actually providing institutional-grade products services.”