Malaysia has the third-largest economy in Southeast Asia. It is an exciting fact that Malaysia is a constitutional monarchy. The economy of this Asian country was rapidly developing since gaining independence in 1957. Right now, it has not only one of the largest economies in the region, but its economy is among the top forty economies in the world. This fact shows that this country, which is home around 33 million people has the potential to achieve even better results.

Another interesting fact about Malaysia is that its economy was growing by 6.5% for almost 50 years. Since gaining independence, this country was able to reach good results. For example, it has a newly industrialized market economy.

However, in a modern world, it is getting harder to develop the economy when the global economy is in bad shape. There are many factors that contributed to the current situation. The ongoing trade war between the two largest economies in the world had a negative impact on Malaysia. It is not surprising as the International Monetary Fund, as well as the World Economic Forum and other organizations, are concerned about the situation.

The trade war between the U.S.-China started more than a year ago. However, neither the U.S. nor China are ready to end trade was as soon as possible. In the best-case scenario, China and the U.S. will reach a partial deal. However, even this will be a massive achievement after a protracted dispute.

Malaysia, as well as other countries, are trying to deal with problems created by the trade war. It is worth mentioning that for the first time since the 1957 ruling political coalition lost the elections. This happened in 2018. It was important in the history of Malaysia. 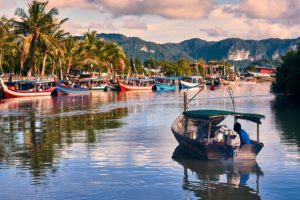 The new government has to deal with the number of problems. Prime Minister Mahathir Mohamad inherited huge debt from the previous government. According to the current Malaysian government, the debt is more than 1 trillion Malaysian ringgit or $238.5 billion.

As mentioned above, due to the trade war the Malaysia government is struggling to deal with problems. The state budget for 2020 which became available to the public, is smaller than the one for 2019.

According to the government, the budget for 2020 is 297.02 billion ringgit or $79.85 billion. It means that in comparison with the budget for this year, the budget decreased by more than $4 billion. For example, the revenue is lower by 7.1%.

Another problem for Malaysia is that the fiscal deficit will reach 3.2% of gross domestic product. The Finance Minister Lim Guan Eng said that it would be a challenge to meet its earlier deficit target for 2020. He also mentioned the trade war in connection with the trade deficit. His comment once more underlines that the Malaysian economy is struggling due to the trade war.

The excellent news about Malaysia is that companies are looking to diversify their supply chains. This creates an opportunity to attract foreign investors. This is important for the Malaysian government and such projects will help to boost the local economy.