The European Central Bank (ECB) is still uncertain to formally end its generous bond purchase scheme on Thursday, but will take an increasingly dimmer view on growth. This raises the odds that its next step in removing stimulus will be delayed.

The long-flagged end of bond buys must irreversible for the sake of credibility. However, with France and Italy in political tensions, a global trade war that still lurks, and sluggish global growth, ECB Mario Draghi will be keen to emphasize that other forms of support will remain.

This leaves Draghi with yet another crucial balancing act. The ECB should appear confident enough to justify the end of the 2.6 trillion euro, or $2.95 trillion, four-year long bond buying program, but it should also sound adequately connected to keep investors’ expectations about further policy tightening relatively cool.

“Ending quantitative easing now looks more like the ammunition is running out rather than (being) based on a convincing economic outlook,” said. Societe Generale economist Anatoli Annenkov.

A challenge to the ECB is that growth is weaker than policymakers thought even just weeks ago while the predicted rise in underlying inflation has failed to materialize, casting doubt over some of the bank’s assumption regarding the broader economy.

Overall inflation, which is the ECB’s objective, may be near the target now but falling oil prices indicate a slip in the coming months and a solid rise in wages is not feeding through to prices, leaving the bank with unexplained disconnect.

Underscoring this complication, the ECB is likely to slash growth and underlying inflation projections and may take a dimmer view on risks, all while Draghi argues that growth is merely falling back to normal after the recent run.

Meanwhile, the ECB is also going to keep it time horizon open-ended for investing cash from maturing bonds and could discuss fresh long-term loans to banks or whether to push back its first rate hike since 2011.

The bank now expects rates at record low at least through next summer and some argue that an easy way to keep borrowing costs low is to push out those expectations. 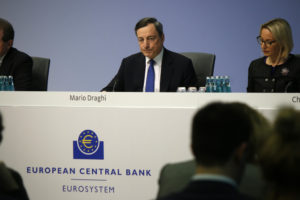 New long term bank loans are also seen as a relatively low-hanging fruit and Draghi has already raised the possibility of rolling over the ECB’s previous facilities. Sources claim that discussions are in their early stages and no decision is likely until next year.

In another long-awaited set decisions, the ECB is also due to spell out how it will use the cash from maturing bonds.

Even though most these decisions are expected to be technical, sources said that the horizon for reinvestment will remain open, another relatively easy step in maintaining lower longer term borrowing costs.