Two days ago, Netflix released the fourth-quarter results. This news had a positive impact, as shares increased by 2.3% in after-hours trading.

Nevertheless, there are certain problems that the company is trying to solve such as the negative free cash flow.

In the first quarter of 2020, according to the company, negative free cash flow will be $1.7 billion. Overall for 2020, Netflix expects negative cash flow of $2.5 billion.

Company’s CEO Reed Hastings is confident that Netflix will solve the issues connected with negative cash flow as it will increase the revenue and operating income.

According to the company letter to shareholders, recent price changes had a negative impact on Netflix. Moreover, competition is increasing as more and more companies are launching streaming services. 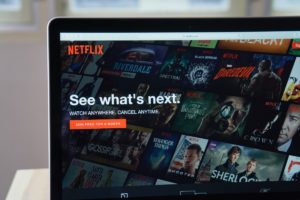 Now it is time to analyze the results and how Netflix performed in the fourth quarter.

Unfortunately, the number of Domestic paid subscribers (U.S. and Canada) failed to reach the expectations as Netflix added 550,000 subscribers vs. 589,000 expected.

The number of international paid subscribers reached 8.33 million vs. 7.17 million as expected by FactSet. It means that Netflix is becoming more popular around the world.

The company expects that in the first quarter of this year, earnings of $1.66 on revenue of $5.73 billion. According to analysts, earnings per share will be $1.20 and $5.76 in revenue.

Moreover, when it comes to new customer analysts are more optimistic than Netflix. The company expects to attract 7 million paid customers in the first quarter of 2020.

According to analysts, the number of new paid customers will reach 7.86 million.