Oil prices were steady on Monday in Asia after official data showed Chinese economic slowdown was in line with expectations and not as sharp as some analysts had feared.

China’s economy expanded 6.4 percent during the fourth quarter of 2018 from a year earlier, as expected, official data from the National Bureau of Statistics showed on Monday.

In 2018, the country’s economic growth came in at 6.6 percent also in line the expectations.

Meanwhile, traders are awaiting more news on the US-China trade frictions. Oil futures increased around 3 percent on Friday after reports suggesting that both countries were considering concessions ahead of a Washington visit from Chinese vice Premier Liu He on January 30 and 31 for talks aimed at resolving the ongoing trade standoff between the two countries.

Elsewhere, Baker Hughes reported Friday that the number of domestic rigs drilling for oil slipped by 21 to 852 in the week to January 11.

It was the third consecutive weekly decline in the rig count and the biggest weekly drop since February 2016, indicating a slowdown in domestic crude production.

That followed a report Thursday from the Organization of Petroleum Exporting  Countries, which  revealed that the group’s output slipped by 751,000 barrels to 31.6 million barrels per day in December.

Meanwhile, gold prices traded near flat on Friday in Asia as investors awaited further news on trade talks for signs of a resolution in the US-China dispute.

Gold futures last traded at $1,281.65 on the Comex division of the New York Mercantile Exchange, down 0.07 percent. The precious metal posted its first weekly decline since mid-December last week, as equities and the US dollar got a lift from investors taking on more risk due to growing hopes for a resolution in the US-China trade war.

On Friday, reports said that US Secretary Steven Mnuchin was considering lifting some tariffs imposed on Chinese imports.

Global stocks rallied on the story, even after it was later refuted by US President Donald Trump, who added that there has been progress toward a trade deal with China. 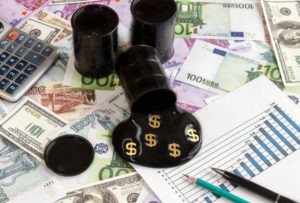 “Things are going very well with China and with trade,” he said at the White House on Saturday. Chinese Vice Premier Liu He is set to visit the US on January 30 and 31 for a new round of trade negotiations.

Meanwhile, concerns over the economic impact of the US government shutdown and uncertainty over Brexit will also remain in focus.

The ongoing government shutdown continues to delay some key US economic reports, but investors will get an update on the US existing home sales and jobless claims this week.

US markets remain closed for a long holiday weekend on Monday.

In the UK, British Prime Minister Theresa May is set to reveal her “Plan B” for Brexit later in the day.