Oil Prices Perk Up on Russian Nod to Cut Output

Oil prices inched up on Friday morning in Asia as the major producer Russia reportedly agreed on a need to cut output ahead of an OPEC meeting next week in Vienna.

Crude oil WTI Futures for delivery in January gained 0.41 percent to $51.66 per barrel on the New York Mercantile Exchange, while Brent Oil Future for February delivery edged up 0.57 to $60.25 a barrel in the Intercontinental Exchange in London.

Russia can be changing its wait-and-see approach and is getting ready to join Saudi Arabia to cut crude output. The two countries will meet with other OPEC members in Austria on December 6 to 7 to come up with a decision on output for the next six months.

The kingdom has proposed slashing output by 1 million to 1.4 million barrels per day to sidestep a dreaded supply glut.

“The idea at the meeting was that Russia needs to reduce. The key question is how quickly and by how much,” said a source.

Russian President Vladimir Putin is scheduled to meet with Prince Mohammed bin Salman in Argentina at the G20 summit.  According to reports, Putin said on Wednesday that Russia was in touch with the OPEC but it would be satisfied with an oil price of $60 barrel, while the kingdom’s energy minister also said that it will not slash oil output on its own.

Saudi Arabia’s proposal came following its increase in output to compensate for an expected all-in supply from Iran as a result of US sanctions. On the other hand, Washington granted waivers to eight countries to continue importing oil from Iran. The kingdom is now pushing OPEC to slash output in fear of a global glut.

US President Donald Trump is aiming to further reduce oil prices by urging producers to raise output. He is expected to discuss oil prices with both Russia and Saudi Arabia at the G20 summit.

“Trump tweets as if he has a joystick and he has everything under his command like he is playing one of these video games,” said Tom Kloza, who is the global head of energy analysis at the Oil Price Information Service.

He said that if Trump succeeded in persuading them to maintain current output, “oil prices could go down to the low 40’s.” 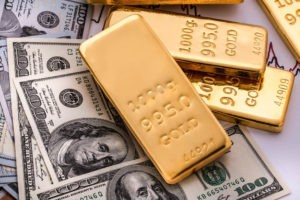 Elsewhere in the commodities market, gold prices slipped in Asian trading as minutes from the US Federal Reserve showed that another hike in interest rates is in the works, buoying the US dollar.

Gold Futures for delivery in February slipped down 0.02 percent to $1,230.2 per troy ounce, after a slight bounce back from the previous session.

The Fed released the minutes of its November 7 to 8 meeting, which showed that the officials are likely to hike interest rates but did not provide a timeline. Hikes in interest rates diminish the demand for safe-haven assets like gold.

Federal Reserve Chairman Jerome Powell said on Wednesday that the interest rates are “just below” the estimates of a neutral level, dragging down the US dollar.

“The rate hike is still ahead of us and that is a temporary headwind for gold. The stock market firming is supporting the dollar, which is not good for gold,” said George Gero, who is the managing director at RBC Wealth Management.