Once a thriving U.S. Company filed for bankruptcy

Home » Once a thriving U.S. Company filed for bankruptcy

Company founded by South Korean immigrants filed for bankruptcy in the U.S. This company dates back to 1984 when husband Do Won Chang and his wife Jin Sook Chang founded the company. The first store was located in Los Angeles. It is important to mention that the headquarters of Forever 21 are still in the same city in California.

This is the story of a company which began its operations with $11,000 in savings. In 35 years since the founding couple, as well as their daughters, transformed the company. Thanks to their actions it became well- known around the world. For example, this company has several hundred shops in the U.S. as well as other countries across the globe.

Another interesting fact about the company is that until this day this company is a family-owned company. To have a better understanding of how this successful this company was during its existence it is a good idea to have at the founder’s finances. Do Won Chang is a billionaire, and this fact once more underlines this fact this his family business is a success story.

Forever 21 became popular due to its appeal to young people as well as older customers who wanted to feel younger. This strategy proved successful, and as a result, it not only became a recognizable brand but also helped to earn money. Moreover, the company became famous due to its pricing strategy.

One of the major reasons which cultivated brand awareness was the price. Forever 21, as well as other companies offered tops for 5$ which made this company affordable for most citizens. Let’s not forget that the population only in the U.S. exceeds 300 million. Thanks to their prices millions of U.S. as well as foreign nationals could afford their clothes. 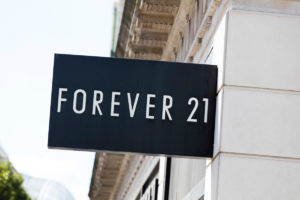 Once a thriving U.S. fast-fashion retailer decided to file for bankruptcy. This happened on September 2019. People who are not familiar with the situation why this fashion retailer had to make this decision. However, there is a number of issues which created pressure on the company.

Forever 21 made an announcement on Sunday, which affected the company and economy in general. This decision will have a serious impact on its operations.

According to the company, it will close up 178 in the U.S. In overall, Forever 21, is going to close 350 stores. Also, the company decided to cease operations in 40 countries. The problems started a long time ago. For instance, in 2018 the revenue of Forever 21 was $3.3 billion. It means that in comparison with 2016 revenue fell by $1.1 billion.

One of the main problems which proved detrimental for the company is problems connected with fast fashion. In the last several years, the industry is facing questions as more and more people care about their environmental footprints. It means that the retailer known for its cheap clothes is not as desirable as it was a decade ago.

Another issue is worker safety. Both of these reasons affected Forever 21 and other companies around the world. However, the company won’t disappear as the fashion retailer has a website and decided to keep hundreds of stores worldwide