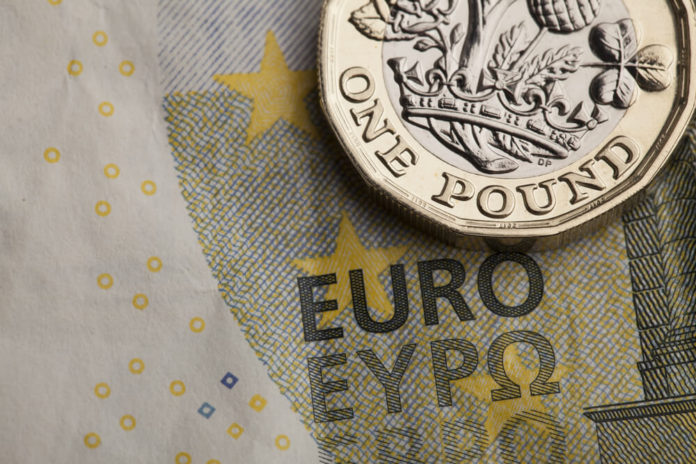 This morning in the forex markets, despite the firm German data above expectations, the pound-to-euro (GBP/EUR) currency pair exchange rate recovered slightly from the losses it recorded the previous day.

Meanwhile, the euro (EUR) was incapable of holding its highs versus the sterling (GBP) amid trade war fears.

Since the markets opened, the pair has declined even lower following the drop on the previous week.

In almost two years, GBP/EUR moved to its worst levels overnight. It is from 1.0812 low before recovering this morning.

GBP/EUR was recording gains of around half a cent and trended near the level of 1.0870 in the forex markets.

But the pound-to-euro exchange rate might gain if other future German data fails.

When markets opened yesterday, the pound had a mixed movement contrary to the significant currency competitors.

It was able to increase versus the trade-correlated currencies hit by trade war doubts but dropped against many others, including the Euro.

In response to weekend comments from UK government officials, sterling plunged as recorded on the forex markets.

A supporter of Prime Minister Boris Johnson, Dominic Cummings, indicates that MPs would not be capable of avoiding a no-deal Brexit. This triggered no-deal Brexit fears to extend and the pound declined.

The British currency has recovered a little today. Yesterday’s stronger than expected UK services PMI data and comments from other MPs suggesting that these comments were misinformed backed Sterling to find some ground to recover.

Investors rowing back from some of yesterday’s sharp losses is much for the GBP/EUR currency pairs recovery today.

Yesterday, as its rivals were sold on geopolitical jitters, investors bought the Euro.

The Euro is dipping against many major currencies today. This is when investors adjust positions, though the currency is still up on the week.

Due to hopes that the Eurozone will not be as strongly deeply moved by US-China trade strains as other nations.