The pound held onto most of its previous session’s gains on Thursday after British Prime Minister Theresa May survived a no-confidence vote, buying time to try to steer her unpopular Brexit deal through a deeply divided parliaments.

The euro was cautious ahead of a closely anticipated policy meeting by the European Central Bank later in the day, after creeping higher on news that Italy lowered its deficit target for next year and expected the European Commission to accept it news 2019 budget proposal.

The US dollar index, which tracks the greenback against six key rivals, was a shade higher at 97.097. It had fallen from a near one-month higher overnight, shedding 0.4 percent, its sharpest drop in two weeks.

In Britain, lawmakers from the ruling Conservative held a secret ballot on whether they had confidence in May’s leadership of the party. Going into the vote and needing some support for her efforts to deliver Brexit, May had guaranteed that she would not lead the party into the next election due in 2022.

She won support from 200 of 317 Conservative lawmaker, and the mutiny by more than a third signaled that she was no closer to getting parliament’s approval for her plan to leave the European Union, making it probable that Pound’s respite would prove temporary.

“Just after the actual result was announced, profit-taking dominated, but Pound stopped appreciating,” said Masafumi Yamamoto, who chief currency strategist at Mizuho Securities. “That shows it’s not bad news, but it doesn’t fix the Brexit issue. In that sense, uncertainty continues.”

With Britain scheduled to leave the EU on March 29, parliament’s opposition has suddenly opened up possibilities including a likely disorderly exit with no deal or even another referendum on membership.

The euro was steady at $1.1367 after tacking on nearly half a percent during the previous session.

The ECB is all but sure to end its lofty bond purchase scheme on Thursday but will take an increasingly dimmer view on the growth. This increases the possibility that its next step in trimming stimulus will be delayed.

“Everybody wants to have a hint regarding whether the ECB will raise interest rates next year but that will probably not happen,” said Yukio Ishizuki, who is the senior currency analyst at Daiwa Securities.

Investors are aiming to find out whether the ECB will start raising interest rates before ECB President Mario Draghi’s term finishes in October next year, he added.

Against the Japanese yen, the dollar gained nearly 0.2 percent to 113.45 yen as demand for riskier assets increased on growing signs of a thaw in the US-China trade relation, and on expectations that Beijing will implement more support measures for the economy. 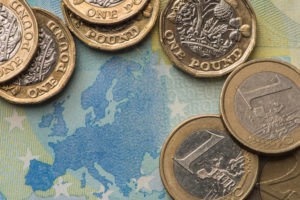 Traders said China on Wednesday made its first key purchases of soybeans since US President Donald Trump and his Chinese counterpart Xi Jingping came up with a temporary trade war truce earlier this month.

The offshore yuan traded at 6.8717 per dollar, after strengthening almost half a percent from 6.8980 per dollar in the previous trading session.

Mizuho’s Yamamoto said he expected the yuan to remain pinned between strong and weak factors as the currency’s moves are not just driven by developments in the US-China trade war but also by fears of a cyclical and structural slowdown in China’s economy.

“To cope with the slowdown, the Chinese authorities need a not-strong renminbi, but it can’t weaken too much—above seven renminbi per dollar,” Yamamoto said.

He added that while China’s authorities don’t aim for a very strong renminbi, he didn’t expect Chinese interest  rates to raise anytime soon.