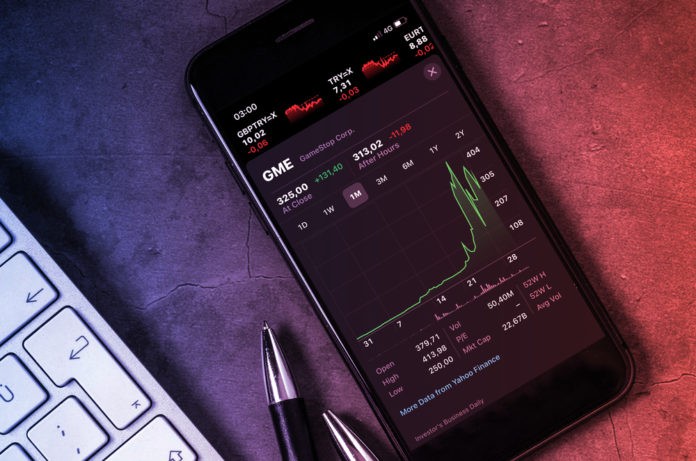 Shares of GameStop started the day at $45. Approaching closing time, the price hit $91 and quickly surged above $100 before 5:00 pm. Subsequently, they completed a very unusual one-day gain, mainly because there was no apparent reason for it.

The day before, GameStop announced the resignation of its CFO. Still, it is highly unusual for the company’s shares to rise significantly after this exit.

The rapid rise in the share price quickly recalled January’s events, when GameStop shares soared 1,000%, up to $400 a share after Reddit forum WallStreetBets worked together to keep stocks afloat.

The rally led to widespread losses among GameStop short-sellers and a nationwide reckoning on financial markets and regulation. However, the stock plunged shortly after, dropping to just $40.59 per share.

Today, as GameStop shares soared once again, the response on WallStreetBets was jubilant.

What caused such an abrupt rise of GameStop?

The common sentiment among the Redditors seems positive about Gamestop shares. Yet, even people who pay more attention to GameStop (the WallStreetBets crowd) don’t understand why the stock soared quickly.

A Bloomberg basket rose more than 5%, the highest since the end of January. AMC Entertainment was up 18% to drive a three-day rise to 59%. Express was up 41%, Naked Brand Group gained 31%, and Koss jumped 55%.

The flurry of activity inflated trading volumes in ‘meme stocks’ and caused a halt on Reddit’s WallStreetBets forum, the center of January’s volatility.

Keith Gangl, portfolio manager at Gradient Investments, said that the Reddit public is still active, and with news like this, they push again. However, he is not sure how long it will last.

The sudden resurgence of seemingly forgotten stocks was reminiscent of last month’s frenzy. Members of Reddit’s WallStreetBets forum incited retail groups to take on professional marketers of short positions. It caught the attention of Wall Street, regulators, and finally Congress.

Various explanations have circulated about what caused the rises. This new GameStop frenzy came after Bloomberg News reported late Tuesday. According to it, the company’s chief financial officer, Jim Bell, was ousted over a disagreement over a strategy to make way for an executive more in line with the vision of an activist investor and board member Ryan Cohen. His joining the board in early January underpinned the first wave of moves in the stock after grabbing the attention of WallStreetBets.