The dollar hovered near a 19-month high on Monday, boosted by safe-haven buying as escalated worries of a global economic slowdown diminished appetites for riskier assets such as stocks as well as Asian currencies.

Data from China and Europe were weaker than expected and there were concerns over a potential government shutdown spooked investors away from stocks toward the greenback and yen.

“The dollar is clearly showing it is attractive during times of market stress,” said Ray Attrill, who is head of currency strategy at NAB in Sydney.

The dollar index, which tracks the dollar’s performance against a basket of six other major currencies, was little changed at 97.44, lower than the 19-month high of 97.71 it reached on Friday.

The Australian dollar, whose performance is closely tied to China’s economy, was marginally lower at $0.7174. It lost 0.3 percent of its value last week as data showed Chinese November retail sales grew at the weakest pace since 2003 and industrial output increase the least in almost three years, emphasizing risks to the economy.

The offshore Chinese yuan was sideways at 6.8974.

Aside from fears of a global economic slowdown, markets are also keeping close tabs on the possible direction of US monetary policy.

The Federal Reserve is scheduled to increase interest rates by 25 basis points at its two-day policy meeting that starts Tuesday.

The central bank has increased interest rates eight times since December 2015 in an attempt to restore policy to more normal settings after having slashed borrowing costs to near zero to fight the financial crisis that happened a decade ago.

With the increase largely priced in by the market, bigger moves in the dollar will be mostly directed by the bank’s forward guidance.

According to their projections in September, the average consensus among the Fed’s policymakers was for three rate hikes in 2019. On the other hand, interest rate futures used to measure the likelihood of further increases are pricing in only one rate increase in 2019.

“Any content that speaks to the difference between market pricing of one interest rate rise in 2019 versus previous Fed indications of three rises is very likely to move markets,” said Michael McCarthy, who is based on Sydney and is the chief market strategist at CMC Markets.

Traders expect that higher US borrowing costs likely will dent US growth momentum and ultimately force the Fed to pause its monetary tightening policy.

Recent comments by Fed officials have also been read as dovish by some analysts. Last month, Fed Chairman Jerome Powell said that rates were near the range of policymakers’ estimates of “neutral,” which is the level where the economy is neither stimulated nor impeded. 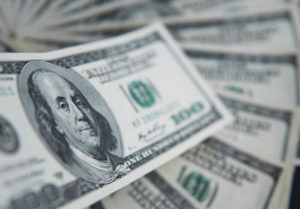 “The Fed will most likely move from an auto-pilot mode to being data dependent,” said Attrill.

The dollar increased 0.1 percent over the yen in Asian trade to trade at 113.48. Interest rate differentials between the US and Japan make the dollar more attractive bet than the Japanese yen, according to some analysts.

The Bank of Japan has a meeting on December 19 to 20 at which policy is expected to remain highly accommodative as inflation remains well lower than its target.

The euro was also barely changed at $1.1310, having shed 0.6 percent last week after weaker-than-expected data out of France and Germany indicated that the economic activity within Europe was still lackluster.

The British pound was still under pressure in Asian trade, down 0.02 percent at $1.2582. British trade minister Liam Fox said on talks with the European Union to secure “assurances” for parliament on Prime Minister Theresa May’s Brexit deal will take time, with a decision scheduled in the new year.