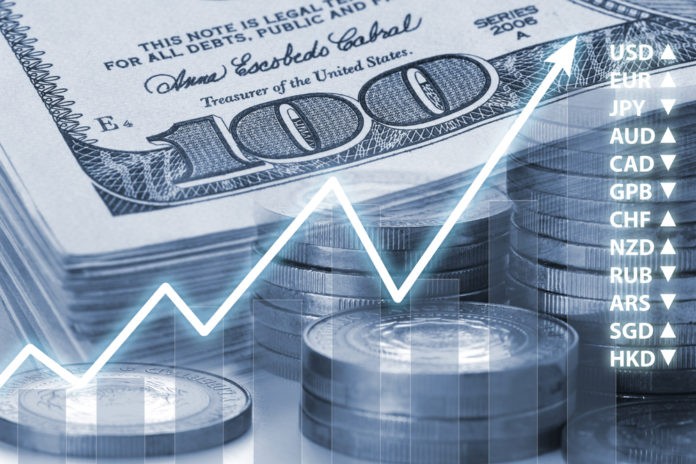 The U.S. dollar rose on Wednesday, thanks to higher Treasury yields, caution ahead of the European Central Bank’s policy meeting as well as concerns regarding global growth.

The dollar index which tracks the U.S. currency against a basket of six other currencies added 0.1% to 92.635 at 2:55 AM ET. The index was close to its highest point from the beginning of the month.

The risk-sensitive AUD/USD dropped 0.2% to 0.7370. The Australian dollar declined following the Reserve Bank of Australia’s decision. The country’s central bank made the decision to extend its bond-buying program through February.

On early Wednesday, the benchmark 10-year Treasury note traded at 1.37%, just off Tuesday’s high of 1.39%, which was the highest level since mid-July, and a boost to the dollar. This yield jumped in the wake of Friday’s weaker-than-expected jobs report. The Federal Reserve is closely monitoring the country’s labor market. The latest jobs report has the potential to affect the Fed’s decision regarding its bond-buying program.

The jobs report added to the fears that the rise in Covid-19 cases would stunt U.S. economic growth in the second half of 2021. The country recorded more than 40 million cases since the beginning of the pandemic. The world’s largest economy recorded more cases than any other country in the world.

It is also important to monitor the Bank of Canada’s meeting. The country’s central bank is not expected to change monetary policy, particularly after disappointing second-quarter GDP data. Another central bank this time from Poland is also excepted to leave its benchmark at a record low of 0.1%. Poland’s central bank is under pressure from the European Union’s fastest inflation. So, it might have to lift interest rates in the near future.