Singapore Downgraded its Economic Forecast for 2020

The coronavirus pandemic created additional pressure on the economy of Singapore. As a result, the country downgraded its economic forecast for 2020. Importantly, Singapore’s economy is expected to shrink by between 4.0% and 7.0% this year. This information came from the country’s Ministry of Trade and Industry.

Unfortunately, Singapore downgraded its economic forecast for the third time in 2020. As a reminder, the last projection was for a gross domestic product (GDP) contraction between 1.0% and 4.0%. According to the statement released by the Ministry of Trade and Industry, problems related to economic activity in major economies around the world surpassed expectations.

Moreover, measures implemented by the governments affected the economic activity in major economies such as the U.S. China and Europe. People should take into account that, such weakness would continue even after countries will remove those containment measures. It makes sense as the risk of further waves of infections will continue to affect the global economy.

Consequently, outward-oriented such as manufacturing, wholesale trade, transportation as well as storage will be affected by this situation. Furthermore, many consumer-oriented companies in retail and food services already suffered due to the containment measures implemented in the country.

The economy of Singapore in the first quarter 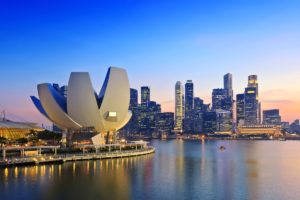 Importantly, the downgrade in economic forecasts came at a time when Singapore registered a 0.7% contraction in the first quarter of 2020. It means that compared with the same period in 2019, the local economy contracted by 0.7%.

Nevertheless, this result is less than expected by analysts. They expected that the local economy would decline by 1.5%. Moreover, the official forecast was even higher, as authorities expected the GDP to fall by 2.2%.

Also, on a quarterly basis, Singapore’s economy shrank by 4.7%. Interestingly, this result was also better than expected by analysts. Let’s have a look at how different sectors performed in the first quarter.

For example, manufacturing increased by 6.6% compared with the same period last year. However, accommodation and food services declined by 23.8% year over year. Also, transportation and storage fell 8.1% compared with the first quarter of 2019. Nevertheless, finance and insurance rose 8.0% from last year.

It is worth mentioning, that, Singapore’s government imposed partial lockdown measures called “a circuit breaker” in early April. However, the government prolonged the so-called circuit breaker beyond the initial one month. The country reported one of the highest numbers of coronavirus cases in Asia. Consequently, it will take time to boost the economy.