Stock chart patterns one should know

Chart patterns are your main tool in analyzing the value of any sort of stock. Without them, charts will simply tell you the past and present price of a stock (or a set of stocks). However, with the knowledge of what patterns to look for, one can extrapolate far more. Most of the more easily identifiable patterns tell of what will happen in the short term. They usually signal if a stock’s value will go up, down, or stay where it is. If you look further back in time, however, you are likely to find that the same patterns appear year after year for many stocks. This kind of knowledge helps in understanding the macro behavior of a stock’s price.

When doing technical analysis, it should be your aim to combine all this information together and draw your conclusions based on this. Whether you trade on short-term day trading or are a fan of long-term strategies, this is still likely to be important for you. And so, in this article, we would like to introduce you to some of the most important chart patterns to look for.

We shall start here, with one of the more famous chart patterns available. It flags that a bullish trend is soon coming to an end. 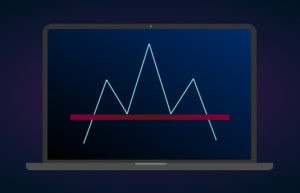 What should you look for in identifying this pattern? Well, the name is the first clue. You should see three peaks, with the middle one showing the highest point. The other two should be fairly similar in size. So you see two relatively small points (shoulders), with a peak in the middle (head). The main point here is to ensure that the third point is going to align with the first. You could end up jumping the gun too early. The middle spike could just be an anomaly, and the value of the stock would keep rising thereafter. If you are too late, then the value of the stock would already plummet by the time you get to it. Fewer people would also be willing to be said stock. In this situation, you have to carefully balance your time to strike at such an opportunity.

You could also have a reverse of this pattern, three troughs, which signal a reversal of a bearish trend.

This kind of pattern takes some time to take shape, so you need a little patience when you see it coming. 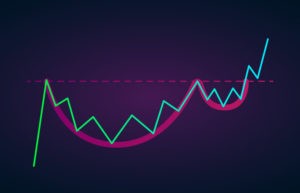 This chart pattern is also made up of a few discernable components. There is a gradual trend, which would form the shape of a “U” on the chart. There is a drop in value, followed by a brief period of stability, followed by an increasing uptrend. This is the “cup” formation. 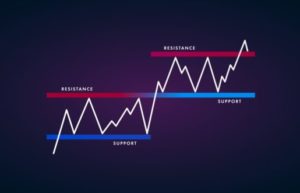 If there it does not near the support or resistance after this point, it is a sign that things will change. More specifically, it points to the possibility that the value would reverse. However, like before, you should be careful about jumping the gun too early. It is also very feasible that the trend will not reverse. After the second time it touches the limit, it is perfectly possible for the value to break past it. After this, the market will take some time to find a new support or resistance level for this stock.

So there you have it, some of the most basic chart patterns to look out for. Next time, we shall have a go at analyzing even more, more specific, chart patterns.