The World Trade Organization and the global economy

Home » The World Trade Organization and the global economy

The Geneva-based organization released a statement regarding global trade. The World Trade Organization decided to lower its forecast for 2019 as well as 2020. It is not surprising as the global economy is slowing down. There are many reasons which had a negative impact on the economy.

The trade war between the U.S. and China started in 2018. However, it is hard to predict when this dispute will end. Donald Trump became president in 2017, and since that period of time, his administration took part in several such disputes. However, the dispute between the largest economies in the world created serious problems for companies around the world.

The director-general of WTO Robert Azevedo made a comment. He underlined the importance of trade conflicts in the global economy. He said that such disputes force companies to changes their plans regarding the investment. It is important to note that without such a decision it will hard to raise the standards of living.

Another problem, according to WTO is that tensions are also bad for the job market. It means that companies will hire fewer employees as they can produce goods with fewer workers.

Based on the World Trade Organization’s forecasts global trade in merchandise will increase by 1.2% in 2019. It means that WTO reduced its forecasts from 2.6% to 1.2%. In April Geneva-based organization thought that world trade in merchandise would increase by 2.6%.  This is another example of how trade disputes can affect the global economy. In 2018, this number was higher as it was 3%.

There is another issue world trade, in general, is going to increase by 2.7% this year. According to previous forecasts, this number is lower by 0.3%.

WTO dispute between the EU and U.S. 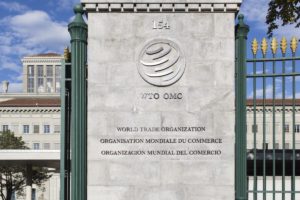 There is another dispute which may have an impact on the economy. However, this time, it is not the U.S.-China trade war. It is about the dispute between the European Union and the U.S. This dispute will affect companies from civilian aircraft to dairy products.

The World Trade Organization will announce the decision regarding this dispute. Mark Hogan, who will become the next EU trade commissioner made a comment about this topic. Hogan said that the European Union has to defend its interests.

The WTO tribunal will most likely announce this decision this week. The bone of contention between the U.S. and the EU is the aviation industry. This dispute started 15 years ago, and there is a chance that this dispute is coming to an end.

According to the Geneva-based organization, Airbus received state subsidies, and such decisions helped the European aircraft producer to gain an unfair advantage. However, WTO also found out that Boeing also received subsidies.

The three-person tribunal will decide the number of tariffs that the U.S. can impose on EU products. According to several sources, the tribunal may award around $7.5 billion. This will be the highest amount awarded in the history of the World Trade Organization.

The trade disputes between the U.S. as well as China and the EU are a serious challenge to the global economy. The WTO’s statement once more highlighted these problems.