US President Donald Trump pledged on Sunday not to bend in his demand for a wall along the southern border with Mexico but stated that the barrier could be made of steel instead of concrete as a potential compromise with Democrats who refuse to fund it.

Trump’s statements came at the beginning of the third week of a partial government shutdown which was a result of the dispute that has left hundreds of thousands of federal workers idled or without paychecks.

Trump threatened again, without providing details on where the funding would originate, to declare a national emergency as an alternative way to build the wall, depending on the results of the talks in the coming days.

Democrats have refused to approve th $5.6 billion that Trump wants to fulfill a 2016 campaign promise to prevent illegal immigration. Led by new Speaker Nancy Pelosi, Democrats passed a bill in the House of Representatives last week to re-open the government without wall funding. Pelosi has called the wall immoral.

“This is a very important battle to win from the standpoint of safety, number one, (and) defining our country and who we are,” Trump told reporters at the White House before leaving for a short trip to the Camp David presidential retreat. “The barrier, or the wall, can be of steel instead of concrete, if that helps people. It may be better.”

The White House painted that offer, which Trump floated previously, as on olive branch.

In a letter to congressional leaders on Sunday articulating its funding demands, the Trump administration included a request for an extra $800 million to address urgent humanitarian needs at the southern border.

Mick Mulvaney, who is Trump’s acting chief of staff, said that agreeing to a steel barrier would allow Democrats to stick to their refusal to fund a wall.

“That should help us move in the right direction,” he said.

Meanwhile, House Majority Leader Steny Hoyer did not answer directly when asked whether the White House offer the move away from a concrete structure was suggestive of compromise.

Vice President Mike Pence led a second round of talks with congressional aides on Sunday about the issue, but Trump said that he did not expect those talks to reap results, noting that the principals (himself, Pelosi, and Senate Democratic leader Chuck Schumer) were the ones who could solve it quickly. 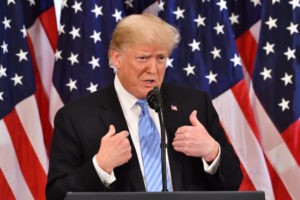 “If we don’t find a solution, it’s going to go on for a long time. There’s not going to be any bend right here,” Trump said.

He later tweeted on Twitter that the Pence talks were productive. However, Democratic aide familiar with the meeting said that Democrats urged the White House to pass measures to re-open the government without wall funding and Pence said that Trump would not do that. The aide said no progress was made and no further meetings of the group were scheduled.

Democrats could demand other kinds of concessions from the White House, such as protections for immigrants brought illegally to the United States as children, known as Dreamers, or changes to other spending provisions.

Meanwhile, Trump said that he wanted to help on the Dreamer issue but preferred to wait for Supreme Court ruling on it first.