The U.S. dollar declined to its lowest point in several weeks against a basket of currencies on Tuesday, as investors looked to U.S. jobs figures later this week. They are looking for more information about the possible path of U.S. Federal Reserve monetary policy. The greenback struggled since Fed Chair Jerome Powell said at the conference in Wyoming that tapering could begin in 2021.

The U.S. currency briefly pared some of its decline on the session. The S&P CoreLogic Case-Shiller composite index of 20 metropolitan areas helped to boost the greenback for a while. The index showed U.S. single-family home prices rose in June from the previous year at the fastest pace on record.

Choppiness for the dollar ensued as a weaker-than-expected Chicago PMI for August saw the greenback trim its decline, only to once again resume a downward move after the Conference Board’s reading for consumer confidence failed to meet expectations.

Analysts and investors will look to a round of U.S. data later this week to measure the strength of the labor market. They are trying to determine when the central bank may begin tightening its policy.

Euro zone inflation jumped to a 10-year-high in August, with the consumer prices in the 19 countries sharing the euro up by 3%. 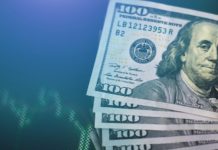 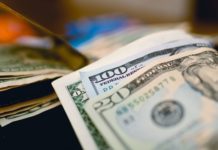