U.S. economy in the third quarter

U.S. President Donald Trump likes to say the U.S. economy is stronger than ever and he is trying to use this topic to boost his popularity. We should take into consideration that in one year Trump is planning to win the second term in office.

In this situation, the strength of the U.S. economy is crucial as otherwise, it will be hard to achieve the goal. Ongoing impeachment inquiry as well as the problems connected with trade war already complicated the situation. Trump can’t afford another serious problem that has the potential to undermine his presidency.

The good news for him is that the economy is growing for ten years in a row. It is the longest period of uninterrupted economic growth in modern U.S. history. However, there is a lot of time before the election, and there is a number of problems that may influence the local economy.

For example, the global economy is slowing down. Also, the demand is falling, and in combination with a strong U.S. dollar, this will have a negative impact on U.S. exports. These are only some of the problems which may affect the economy.

The trade war between the U.S. and China hurts his supporters across the country. Let’s not forget that he won his firm term largely thanks to agrarian states. It means that Trump has to be careful when it comes to economic growth in the long run. He needs to reassure the voters that without him the U.S. economy will be worth than during his presidency.

Trump said that the U.S. economy would grow by 3% or more in 2019. According to the current U.S., President U.S. economy will benefit from Republican tax cuts passed in 2017. 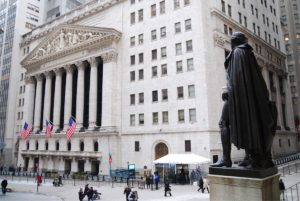 In the second quarter, economic activity in the U.S. increased by 2%.

According to the Commerce Department, two major factors helped the U.S. economy. The first one is the consumer spending and the second one is the governmental expenditures.

The annualized rate of personal consumption expenditures, which is used to measure spending by American households rose by 2.9% in the third quarter. At the same time, government spending increased by a 2% rate.

However, in comparison with the second quarter of 2019, consumption fell from 4.6% to 2.9%. Several factors influenced this result. Global economic problems, as well as the issues connected with manufacturing, affected retail sales in September. This may indicate that U.S. households are changing their spending habits.

The results from the third quarter show that the economy is growing despite the problems.