On January 15, U.S. stocks increased, but stock indexes had to give up most of their gains at the end of the trading day.

It was a historic day as the U.S. and China reached a phase one trade deal. This is a very important moment for the stock markets as well. The prolonged trade war created numerous problems for investors and other interested parties.

However, it was not enough for the stocks to strengthen their positions by the end of trading.

Nevertheless, during the day, Dow Jones rose 187.92 points. At the same time, the S&P 500 added 0.7%, and the Nasdaq Composite rose 0.5%. As mentioned above, major stock indexes were unable to hold the momentum as stocks declined in several hours. 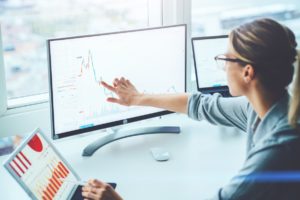 The trade deal between the U.S. and China is a huge success. It is important to mention; markets will gain from the decision as uncertainty harmed the economy.

Other significant factors also influence the markets. One of them is the comment made by the White House economic advisor Larry Kudlow. He said the Trump administration would present more tax cuts in 2020. His comment helped to improve the market sentiment.

Also, Goldman Sachs reported revenue for the quarter that exceeded the market expectations. Other companies such as BlackRock, UnitedHealth, and PNC Financial also surprised the analysts.

At the moment, 30 S&P 500 companies released their quarterly results. The good news is 82% of those companies reached better-than-expected profits.

Expectations regarding the corporate profits were lower ahead of the reporting period. Hopefully, companies managed to beat the expectations.