U.S. President Donald Trump promised to reduce the trade deficit. However, it is interesting to have a look, how the Trump administration is going to accomplish this goal.

It is no secret that Trump blamed unfair practices by China as well as other countries for problems connected with the trade deficit. The trade war between the U.S. and China started more than a year ago. According to the administration officials that the outcome of the trade talks will boost the U.S. economy.

Trump is famous for his negative views regarding U.S.-China trade relations. He made it clear that he was not happy with the ongoing situation even before becoming the president.

It turns out that trade wars with China and other countries are not as beneficial as Donald Trump and supporters claim it is for the economy.

In the first nine months of 2019, the trade deficit not only did not shrink but increased to nearly $500 billion. This example shows that engaging in a trade war was not the best solution to reduce the trade deficit.

For example, in comparison with the same period in 2018, the trade deficit increased by 5.4% to $481.3 billion. According to information provided by the Commerce Department. This data became available to the public on November 5.

Another problem is that American exports declined by $7 billion in comparison with the same period in 2018. Moreover, imports rose by $17.8 billion.

The influence of trade war 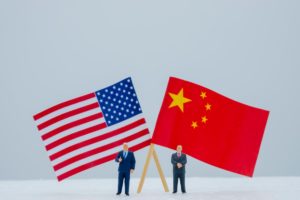 One of the major reasons to initiate the trade war with China was to end unfair practices and to level a field between the countries. However, looking at the data, it is hard to say that the trade war solved the problems.

Some people will say that China lost more than the U.S. when calculating in the U.S. dollar. However, we should take into consideration that the U.S. imported more products from China than vice versa.

In this situation, it is important to mention industries in the U.S. suffered due to the trade war. For example, in comparison with the first nine months of 2017 exports of minerals and ores to China decreased by 65% in 2019. This a huge problem for the industry.

Moreover, there are other sectors as well, which are in a difficult situation. Exports for the forestry products declined by 39% while exports for livestock fell by 35%.

The U.S. agricultural sector lost a lot of money due to the trade war. Export of soybeans used to be a very profitable business before the trade. The protracted trade war is harmful to U.S. farmers and companies as exports declined by $2 billion.

Interne national organizations such as the International Monetary Fund and the World Trade Organization raised concerns about the trade war. The position of WTO and IMF is that trade war hurts the economy.