US, China on a Trade War Truce after Meeting

Home » US, China on a Trade War Truce after Meeting

China and the United States have agreed to a ceasefire in their prolonged and disruptive trade war on Saturday after a high-profile meeting in Argentina between US President Donald Trump and Chinese President Xi Jinping. The meeting also resulted in a no-escalated tariff on New Year.

The White House said that the president will leave tariffs on $200 billion worth of Chinese imports at the 10 percent at the beginning of 2019, agreeing not to raise them to 25 percent “at this time.”

“China will agree to purchase a not yet agreed upon, but very substantial, amount of agricultural, energy, industrial, and other product from the United States to reduce the trade imbalance between our two countries,” the White House said. “China has agreed to start purchasing agricultural product from our farmers immediately.”

China and the US also agreed they will attempt to have this “transaction” completed within the next 90 days, but if this does not take place then the 10 percent tariffs will be raised to 25 percent.

The Chinese government’s key diplomat, State Councilor Wang Yi, said that the negotiations were conducted in a “friendly and candid atmosphere.”

“The two presidents agreed that the two sides can and must get bilateral relations right,” Wang said, adding they agreed to further exchanges at appropriate times. “Discussions on economic and trade issues are very positive and constructive. The two heads of states reached consensus to halt the mutual increase of new tariffs.”

“China is willing to increase imports in accordance with the needs of its domestic market and the people’s needs, including marketable products from the United States, to gradually ease the imbalance in two-way trade,” he added. 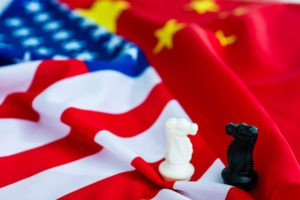 Furthermore, the two sides are said to have agreed to open their markets, with China advancing a new round of reforms that will help resolve “the United States’ legitimate concerns. The two countries would also “step up negotiations” toward the full riddance of additional tariffs, said Wang.

The announcement came after the two leaders sat down with their aides for a working dinner at the end of a two-day gathering of world leaders in Buenos Aires, their dispute having unnerved global financial markets and weighed on the world economy.

After the two-and-a-half meeting, White House chief economist Larry Kudlow told reporters that the meeting went “very well,” but he gave no details as he boarded Air Force One headed home to Washington with Trump. Last week, Kudlow said that the president welcomed a deal but certain conditions have to be met.

China’s goal was to convince Trump to ditch plans to increase tariffs on $200 billion of Chinese goods to 25 percent in January, from 10 percent at present. Trump had threatened to do that, and also add tariffs on $267 billion of imports, if there was no breakthrough made in the talks.

With the two countries clashing over commerce, financial markets will take their lead from the results of the talks, widely seen as the most important meeting of US and Chinese leaders in years.

Asian markets were upbeat with the ceasefire announcement, while the dollar weakened as more investors adopted a risk-on approach. Oil prices rallied after the news was reported.