US Economy Slows Down in Q3

Home » US Economy Slows Down in Q3

The US economy slowed down in the third quarter as previously estimated, but the pace was likely strong enough to keep growth on track to hit the Trump administration’s 3 percent target this year, even as the momentum appears to have moderated further early in the fourth quarter.

Gross domestic product rose at a 3.5 percent annualized rate, the Commerce Department said in its second estimate of third quarter GDP growth. That was unchanged from its estimate in October and we above the economy’s growth potential which economists estimate to be about 2 percent.

The unrevised third quarter GDP reading reflected a faster pace of inventory accumulation and more business spending on equipment than previously thought that was offset by downward revisions to consumer spending and exports. The economy grew at a 4.2 percent pace in the April-June quarter.

Strong growth last quarter likely keeps the Federal Reserve on course to raise interest rates in December for the fourth time this year, in spite of the more vocal criticism from President Donald Trump that tighter monetary policy is slowing down the economy.

Fed Chairman Jerome Powell stated at a Economic Club of New York luncheon on Wednesday that he expected solid growth, low unemployment, and inflation near the US central bank’s 2 percent target.

“There is a great deal to like about the outlook,” said Powell.

The dollar was little moved against a basket of currencies, while the US Treasury prices increased. Stocks on Wall Street were trading higher.

Growth is mostly fueled by US President Donald Trump’s $1.5 trillion tax cut package, which has provided consumer spending a boost and supported business investment. The fiscal stimulus is part of measures adopted by the Trump administration to boost annual growth to 3 percent on a sustainable basis. 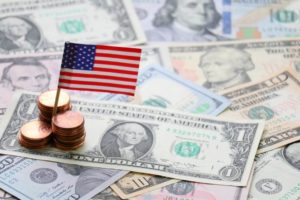 An alternative measure of economic growth, called the gross domestic income, rose at a a rate of 4.0 percent in the third quarter, hastening from the second quarter’s 0.9 percent pace.

The average of GDP and GDI, also referred to as gross domestic output and considered a better measure of economic activity, rose at a 3.8 percent rate in the July to September period, up from a 2.5 percent growth pace in the April to June period.

However, gloom is gathering over the economic expansion that is now in its ninth year and the second longest on record. The goods trade deficit widened further in October, pressured by declining exports of soybeans, capital goods, and automobiles, said the Commerce Department in another report on Wednesday.

New home sales tumbled in October, the latest hint that the housing market was softening because of higher interest rates, showed a third report.

Data that were released last week showed business spending on equipment weakening in October and it could remain tepid with Brent crude oil prices by slumping by more than 30 percent from a four-year high above $86 in early October. Cheaper oil usually hurt investments in the energy sector because of reduced profits.

General Motors Co said on Monday that it would cut thousands from its North American workforce, cut production, and get rid of slow-selling car models, which could have ripple effects on the domestic economy.