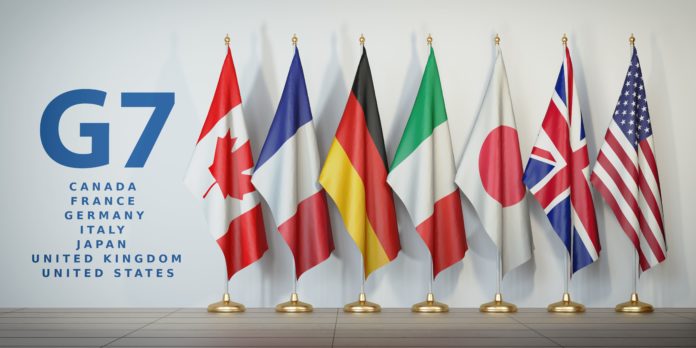 The Group of Seven or G-7 as it is often called is an intergovernmental organization that dates back to the 1970s. It consists of the world’s largest economies: Germany, France, Italy, Japan, the United Kingdom, the United States, as well as Canada. Leaders of some of the most developed countries in the world meet periodically to address various issues, with each member taking over the presidency on a rotating basis.

It is worth noting that, the G-7 was formally referred to as the G-8 for many years. Nevertheless, the countries mentioned above removed Russia from G-8 in 2014 due to its actions in Ukraine. So, the Group of Eight ceased to exist in 2014.

Interestingly, the European Union (EU) is sometimes considered to be a de-facto eighth member of the Group of Seven. The EU holds all the rights and responsibilities of full members, but with few exceptions. For instance, the European Union can’t host meetings. As a reminder, the EU is a group of 27 countries that operates as a cohesive economic and political block. It consists of a group of countries that acts as one economic unit in the world economy.

The Group of Seven is not an official, formal entity and, thus, has no ability to enforce the recommended policies and plans the G-7 compiles. The major purpose of this organization is to discuss and sometimes act in concert to help resolve global problems. Since the 1970s the G-7 discussed financial crises, monetary systems, and main world crises, such as oil shortages.

It also launched initiatives to fund issues and relieve crises where it sees an opportunity for joint action. More than 20 years ago in 1996, in collaboration with the World Bank, the G-7 launched an initiative for the 42 heavily indebted poor countries (HIPC), along with a Multilateral Debt Relief Initiative (MDRI).

Hopefully, many of the poorest countries can receive accelerated debt relief through the HIPC, which reduces debt and debt-service payments while encouraging social expenditure.

As mentioned earlier, the origins of the Group of Seven dates back to the early 1970s. Leaders of the U.S., France, the U.K., West Germany, and Japan met informally in Paris to discuss the recession and oil crisis. Importantly, that meeting inspired President Valery Giscard d’Estaing to invite the leaders of those countries, plus Italy to France in 1975. Finance ministers from the U.S., France, Italy, and other countries stated above attended that meeting in Rambouillet. In 1976, another developed country, Canada joined the group. The summit in Puerto Rico in 1976 became the first of the current Group of Seven.

This intergovernmental organization has an interesting approach when it comes to summits. The host of the summit, rotates annually among member countries in the following order: France, United States, United Kingdom, Germany, Japan, Italy, and Canada.

The Group of Seven made an interesting decision in the 1990s. In 1998, the Russian Federation became the eight-member of the group. However, in less than 20 years, members made the decision to remove Russia from the group due to actions against Ukraine.

Over the years, developing countries reached great results and the absence of a forum about financial matters that included those emerging economies became more glaring. Countries tried to solve that problem by creating the Group of 20 or G-20 in 1999.

Group of 20 and its purpose

As in the case of the Group of Seven, the Group of 20 or G-20 has no legal power. Thus, its agreements, as well as decisions, have no legal impact, but they do influence countries’ policies.

The Group of 20 consists of 19 countries and the European Union. Interestingly, the G-20’s ranks include all members of the G-7. However, the Group of Seven is considered as a more political body. Apart from finance ministers, presidents and prime ministers also attend G-7 summits. Furthermore, the G-7 consists of only developed countries. In the case of the G-20, many of its members are not as rich as the G-7’s members.

As stated above, members of the G-8 removed Russia several years ago. However, the G-20 took a different approach regarding the Russian Federation. Australia proposed to ban Russia from the G-20 in 2020, but Russia remained a member of the larger group. Brazil, India, and China which together with Russia are collectively known as the BRIC nations helped Russia to retain its place in the G-20.

We almost forget to mention the members of the Group of 20. Argentina, Australia, Brazil, China, India, Indonesia, Mexico, Russia, Saudi Arabia, South Africa, South Korea, Turkey. Apart from the countries mentioned above members of the G-7 and the EU are also part of the G-20.

The Group of 20 invites guest countries to attend their events. Spain takes part in the events on a regular basis. The current chair of the Association of Southeast Asian Nations (ASEAN) also takes part in the summits. Furthermore, two African countries (the chair of the African Union and a representative of the New Partnership for Africa’s Development also attend G-20’s events. The host of the G-20 summit also invites at least one country, usually from its own region.