On Monday, the WTI oil contracts for May the delivery dropped to negative rates during an unprecedented excess in supply. Crude futures closed at -$37 per barrel.

The US President, Donald Trump, responded to it with plans to fill the spare space in the Strategic Petroleum Reserve. He mentioned that he would consider halting shipments from Saudi Arabia. 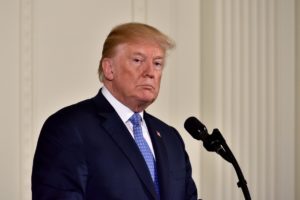 Stabilization is weeks away, says commodities expert at Goldman Sachs. May delivery contracts expire tomorrow. It is leaving traders paying buyers to avoid purchasing the delivery of thousands of barrels.

Jeffrey Currie, an economist and the global head of commodities research at Goldman, said that the market strain remains on the supply side. Still, producers face significant risk in slowing down their businesses. Shutting down a well is incredibly costly, and sometimes you devastate the well forever.

Oil companies have to pay others to keep their wells running. It created a series of unusual transactions since parties propose barrels at unfavorable prices to get rid of them.

Currie said that wells in the Gulf Coast regions would finally step in to close pumping activity. Until they cut supply, near-term crude oil futures remain under fire. Currie says that this is not the end of it. The condition will continue to go on at least through the middle of May.

Earlier in the month, OPEC and its allies agreed to bring peace to a month-long price war between Russia and Saudi Arabia. It aimed to lift the battered market by curbing supply. Oil-producing countries announced plans to cut global production by almost a tenth.

Oil staged a short recovery after the alliance meeting. Still, the cuts weren’t enough to stabilize prices. The oil market crisis is getting worse. Oil transportation and uncoordinated closedowns will encourage volatility for weeks before the supply shortage decreases, he added.

The loss will send a deflationary wave through the global economy. It will complicate what central banks are facing – to keep economies afloat as the Coronavirus continues paralyzing economic activity worldwide.

The US Oil Fund, the largest crude exchange-traded fund, received billions of dollars in fresh funds in recent weeks. It accumulated a fifth of all the exceptional contracts in the May futures contract. However, last week, it moved its position into the June contract and disappeared from May. Without the fund, the contract is left in the hands of physical supply and demand.

Daniel Yergin, a Pulitzer Prize-winning oil historian, noted that the May crude oil contract was going out not with a whimper but a primal yell.