The US initial jobless claims report on Thursday, July 15, came in line with the 360,000 consensus estimate for the week. The figure is lower compared to the previous result of 386,000. Also, the reported number represents the lowest number of unemployment benefit claimants during the pandemic. The number added pressure for Federal Reserve Governor Jerome Powell on his 2-day stint in the US Congress. Powell said that inflation is somehow “uncomfortably” above the central bank’s annual target of 2.0%. For June, the consumer price index (CPI) data is at 5.4% compared to the previous month’s 13-year high of 5.0%. With stable employment and rising prices of basic goods, the Federal Reserve is anticipated to start tapering talks in the upcoming FOMC meetings. The discussion will likely include a possible increase in benchmark interest rate currently at a historical low of 0.25%. The MAs will form a bullish crossover in next week’s trading session. 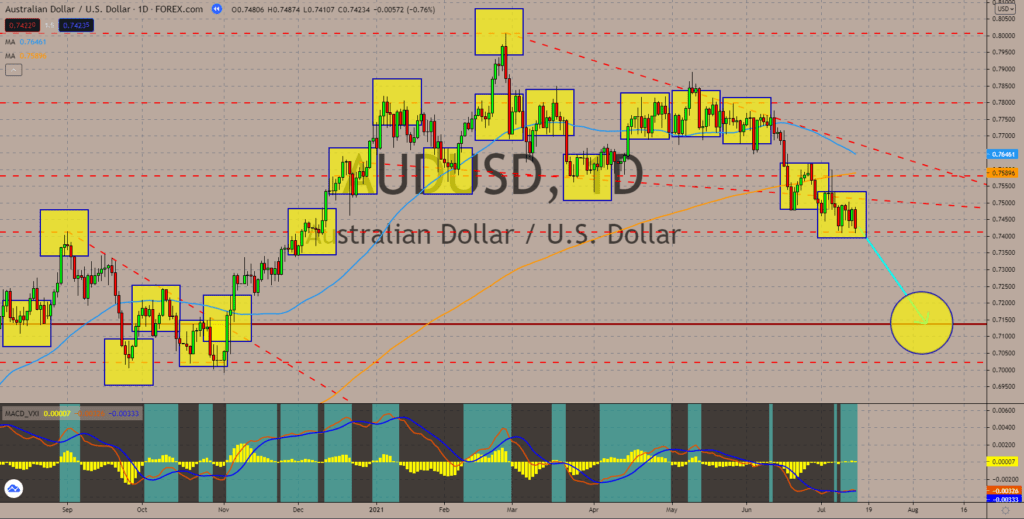 The Bank of Canada kept its key rate unchanged on Wednesday, July 14, at 0.25%. In addition, the central bank downgraded Ottawa’s economic performance in fiscal 2021 from the initial 6.5% to 6.0%. Meanwhile, it expects next year to be better with a 4.6% GDP prediction compared to the 3.7% previous forecast. The uncertainty in the second half of the year adds pressure for the BOC to continue with its accommodative policy. Recent economic reports also supported the dovish stance of the Bank of Canada. ADP Non-Farm Employment Change showed a decline of -294,200 jobs from a revised -318,700 from the prior month. Meanwhile, the manufacturing sales for May were down for the third consecutive month at -0.6%. The bleak data from Canada will see its dollar underperform against its Australian counterpart. The AUDCAD pair is anticipated to move past the 50-bar moving average at 0.93518 with strong support from the MACD line and Signal line. 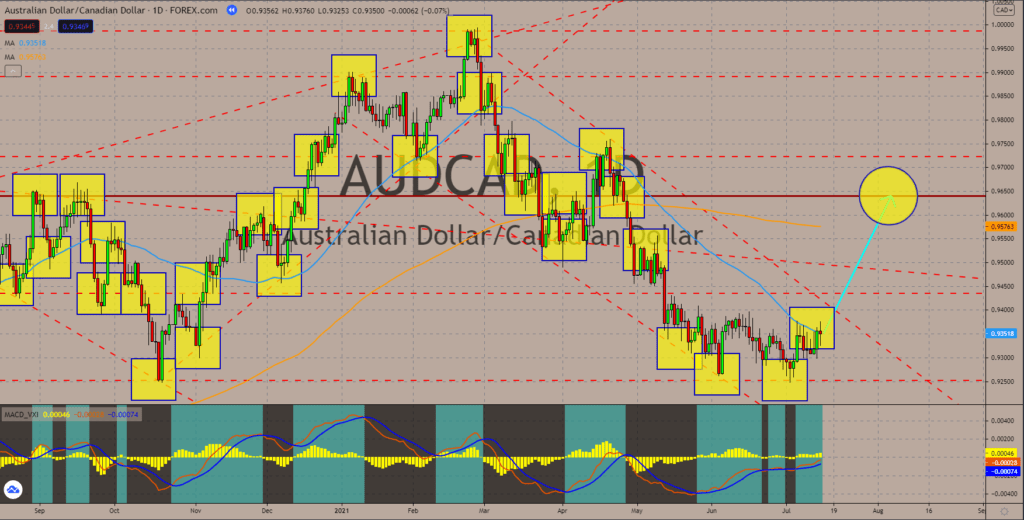 Australia might become the first economic powerhouse to have an interest rate hike in the coming months. The Melbourne Institute sees inflation easing to 3.7% within the next 12 months from 4.4%. The decline in inflation was supported by the Housing Industry Association New Home Sales report which came in at 14.8% from 15.2% prior. However, this is still above the 2.0% to 3.0% annual target range by the Reserve Bank of Australia (RBA). Meanwhile, unemployment is down to a 28-month low or since March 2019 at 4.9% as the economy added 29,100 jobs in June. This indicates an improving economic outlook which, in turn, could trigger the central bank to tighten its monetary policy. On the other hand, Switzerland’s Producers Price Index fell in June to 0.3%. In May, the monthly figure was up by 0.8%. Year on year, the PPI grew at a slower pace at 2.9%. The MACD indicator is expected to reverse to the upside for prices to defy the bearish MAs. 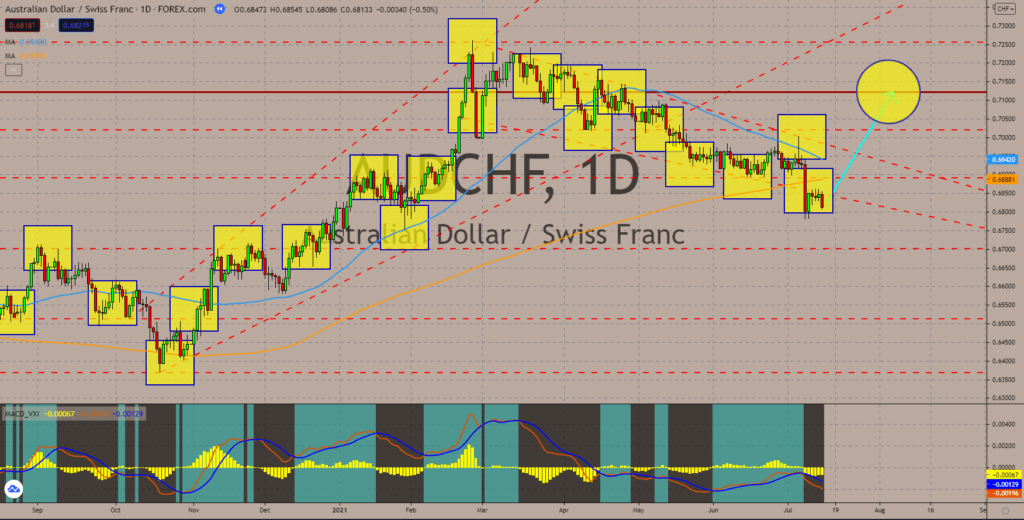 The UK consumer price index (CPI) report picked up to its fastest pace since September 2018 at 2.5% in June. The figure is above the Bank of England’s 2.0% target which could result in a hike soon. On a month-on-month basis, the report was up 0.5% against the estimated 0.2% growth. Its counterpart, the Producers Price Index (PPI), was down -0.1% in June while the YoY report came in at 9.1%. However, the increase in unemployment rate to 4.8% might drag the tapering talks. Although the number of the unemployment benefit claimants was down by -114,800 in June. On the other hand, the Bank of Japan reaffirmed its accommodative policy with a -0.10% interest rate for July. The rising covid cases are also a dovish sign that the Japanese central bank will continue with low interest and massive quantitative easing programs. The GBPJPY pair is expected to move past the resistance of the 50-bar moving average at 154.006 to reach the 160.000 price target. 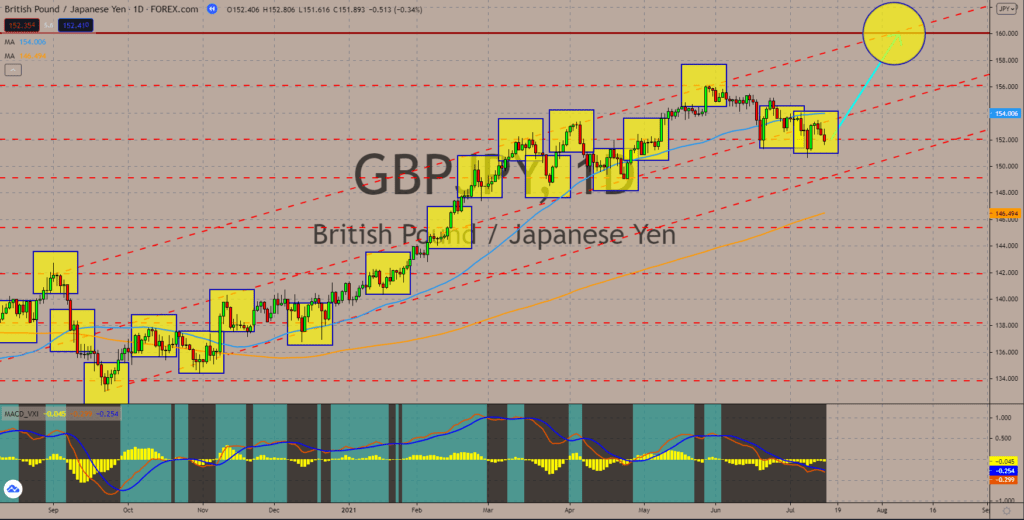